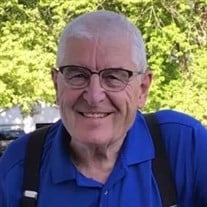 Garry L. Custer, 81, of Minden, passed away on Monday, March 7, 2022 at Bethany Home in Minden. Funeral services will be held at 10:30 a.m. on Monday, March 14, 2022 at Bethany Lutheran Church in Minden with Rev. Donald Hunzeker and Parish Ministry Associate (PMA) Julie Schmidt officiating. The service will be streamed to the funeral home’s Facebook page. Interment will be held following the service at the Minden Cemetery. Visitation will be held from 4:00 to 6:00 p.m. on Sunday, March 13, 2022 at Craig Funeral Home in Minden. Memorials in Garry’s honor are kindly suggested to the family for later designation. Craig Funeral Home is in charge of the arrangements. Garry Lee Custer was born on December 6, 1940 in rural Upland, NE to Louie and Clara (Bartels) Custer. He grew up in the Upland area and graduated from Upland High School with the class of 1958. He was united in marriage to Carolyn Toombs on November 2, 1963 in Kimball, Nebraska, and to this union, three children were born: Carla, Robin and Terry Custer. They later divorced. Garry was united in marriage to Judith (Andersen) Dannull on September 12, 1980 in Hickman, Nebraska. With this union, Katherine Dannull was lovingly added to the Custer family. The family made their home in Upland while Garry was employed by Minden Beef. They later moved to Minden, Kearney, Elkhart, Indiana, and Harvard, Nebraska, before moving to Bethany Home in Minden. Garry was also employed by Eaton Corporation, Crest Homes, Oaklawn Psychiatric Center, Menards, and he also owned and operated a lawn service for many years. Throughout Garry’s life he was a member of various churches: United Methodist Church in Upland, United Methodist Church in Kearney, Sugar Grove Church in Goshen, Indiana and Bethany Lutheran Church in Minden. He had a passion for gardening, cooking and baking. Garry loved doing woodworking projects for family and friends. He thoroughly enjoyed life to the fullest. Garry was a loving and caring husband as well as being a wonderful father to his children. He loved his grandchildren with all of his heart. He was a kind and generous friend to everyone he met. Those left to cherish his memory include his wife, Judy of Minden; son, Terry Custer of Omaha; daughters, Carla (Marty) Puchalla of Lincoln, Robin (Gene) Sladek of Crete and Kathy (Ronnie) Martinez of Elkhart, Indiana; grandchildren, Mathew Custer, Jake Custer, Haley Martinez, Abby Martinez and Justin Sladek; great-granddaughter, Chloe; sister, Joan Fries of Upland; as well as a host of extended relatives and close friends. He was preceded in death by his parents, Louie and Clara Custer; parents-in-law, Alvin and Milrae Andersen; sisters, Evelyn (Harold) Kessler, Milrae (William) Victor, Luella (Lael) Potter and Maxine (Elger) Grams; brother-in-law, Vernon Fries, and infant twin brother, Larry Custer. Tributes and memories can be shared with the family at www.craigfunerals.com.

The family of Garry L. Custer created this Life Tributes page to make it easy to share your memories.

Send flowers to the Custer family.