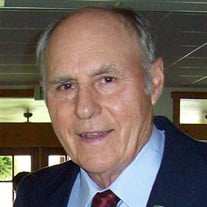 Gary K. Berggren, 86, of Lincoln, formerly of Axtell, passed away on Sunday, August 23, 2020 at Pemberly Place Senior Living in Lincoln. Funeral services will be held at 10:30 a.m. on Monday, August 31, 2020 at Trinity Lutheran Church in Axtell with the Rev. Gale Dorn officiating. Current health recommendations for faith based services will be followed and the use of a face mask is encouraged. The service will be live streamed to the church’s Facebook page. Interment will be held following services at the Pleasant Hill Cemetery in Axtell. Visitation will be held from 4:00 to 7:00 p.m. on Sunday, August 30, 2020 at the Craig Funeral Home in Minden. Memorials in Gary’s honor are kindly suggested to the Trinity Lutheran Church in Axtell. Craig Funeral Home is in charge of the arrangements. The sound of a black powder cannon on August 23, 2020 marks Gary Berggren’s arrival to be with God in Heaven. He was a Christian, a husband, a father, and the village blacksmith. Gary was born in Holdrege on February 23, 1934. He was the third of five children, the oldest son, of R.K. and Merna Berggren. During the dust bowl years of the 1930s, Merna would place a moist sheet over his crib to keep him breathing clearly without dust in the air. As a child, he spent his summers riding a steam locomotive from his home in Axtell to his grandmother’s home in Holdrege and back. He passed the wintertime with his one-eyed great grandfather in a small shooting gallery and blacksmith shop in Wilcox. In 1955 he married his high school sweetheart, Dorothy Kindschuh. He would remember events of their early marriage by what car they were driving like his 1938 Nash and his favorite, 1940 Ford pickup. He worked in, and later purchased Berggren Machine Shop from his father. From the 1960s until today and beyond, there are Berggren blue pumps providing irrigation in most of the reuse pits and along the canals and rivers of south-central Nebraska. Gary retired in 2018 at the age of 84. Throughout his life he was a dirt track race car driver, the Axtell Fire Chief, and a member of Trinity Lutheran Church where he and Dorothy were married. He was an avid sailor on the Nebraska lakes. He was a remarkable marksman from a town of remarkable rifle shooters. He won dozens of state high-power rifle championships in Nebraska and Kansas. His daughter taught him to ski in the mountains of Colorado and in turn, he introduced skiing to the rest of the family. Many of our family’s fondest memories are on the cold and snowy slopes of a mountain. The hardest he ever studied in his life was in his early 40s to pass the FAA written exam to become a private pilot. He instilled the love of flying in his sons and grandsons and spent the next 30 years flying his 1949 Piper Clipper to the World War II Army Air Corps airfields around western Nebraska. Gary and Dorothy raised a daughter Susie, and three sons, Jamie, Christopher and Matthew. Their family grew to 15 grandchildren and 12 great-grandchildren. Gary and Dorothy traveled on adventures around the world to visit their family. He is preceded in death by his parents, sisters Phyllis (infant) and Nita, and brother Dan. He is survived by Dorothy, his wife of 65 years, and his children, grandchildren, great-grandchildren and his youngest brother, Alan. The world is a better place because of his life. Tributes and memories can be shared with the family at www.craigfunerals.com.

Gary K. Berggren, 86, of Lincoln, formerly of Axtell, passed away on Sunday, August 23, 2020 at Pemberly Place Senior Living in Lincoln. Funeral services will be held at 10:30 a.m. on Monday, August 31, 2020 at Trinity Lutheran Church in... View Obituary & Service Information

The family of Gary K. Berggren created this Life Tributes page to make it easy to share your memories.

Send flowers to the Berggren family.