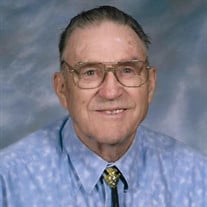 Gaylen J. Hansen, 94, of Minden, passed away on Monday, May 23, 2022 at The Journey House in Lincoln. Funeral services will be held at 10:30 a.m. on Friday, May 27, 2022 at the Minden United Methodist Church with the Rev. Peter Choi and PMA Julie Schmidt officiating. The service will be streamed to the church’s Facebook and YouTube pages. Interment will be held following the service at the Fredericksburg Lutheran Church Cemetery south of Minden. Visitation will be held from 5:00 to 6:00 p.m. on Thursday, May 26, 2022 at Craig Funeral Home in Minden. Memorials in Gaylen’s honor are kindly suggested to the family for later designation. Arrangements are under the care of Craig Funeral Home. Gaylen was born on December 16, 1927 in Ponca City, Oklahoma to William “Bill” and Dora (Nielsen) Hansen. They moved to Minden in February of 1928. He was baptized and confirmed at the Fredericksburg Lutheran Church south of Minden. He attended District 8 school for seven years and graduated eighth grade from Zyba District 32. He then graduated from Minden High School in 1945. On June 4, 1950, he was united in marriage to Jeannette Smith in Minden and spent his entire life farming in Kearney County. Farming was his livelihood and his hobby. Upon retirement from farming, he enjoyed restoring antique engines and attending antique farm shows. He was a proud member of the Sons of the American Legion Post 284. Survivors include his son, William G. (Clarinda) Hansen of Coon Valley, WI; daughters, Sheryl A. Schroeder of Lincoln, Peggy (Lonnie) Luck of Liberal, KS, and Diane (Rick) Eickmeier of Holmen, WI; 11 grandchildren; 18 great-grandchildren, as well as a host of extended relatives and close friends. He was preceded in death by his parents; his wife, Jeannette in 2002; daughter, Shirley Feese; and son-in-law, Ray Schroeder. Tributes and memories can be shared with the family at www.craigfunerals.com.

The family of Gaylen J Hansen created this Life Tributes page to make it easy to share your memories.

Send flowers to the Hansen family.