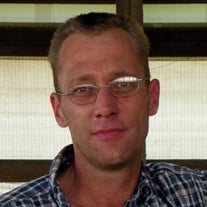 Geert-Jan Sikkenga, 49, of Heartwell, passed away on November 14, 2018 at his parents’ home in Canada. A celebration of life gathering will be held at 11:00 a.m. on Saturday, December 1, 2018 at The Windmill in Minden. There will be no visitation as the family has honored his wish to be cremated. Memorials in Geert’s honor are kindly suggested to the family for later designation. Craig Funeral Home is assisting the family. After a short illness, we had to say goodbye to our dad, son and brother, Geert-Jan Sikkenga. Thankfully we were able to take care of him at his parents’ home until the end with his close family around him. Left behind to deal with this sudden loss are his children Annelies, Harm, Willem and Joanna, his parents Harm and Lieni, and sister Manny. He never lost his sense of humor and was an easy patient to take care of. Geert-Jan was born in the Netherlands on Aug. 2, 1969 and grew up on the dairy farm in Zwiggelte. He loved doing all the work that needed to be done; working with the cows was his passion. He went to elementary school in Zwiggelte, a small two classroom school, where his class of 7 was the largest. It built strong and lasting friendships. After that came MAVO in Westerbork and agricultural college in Meppel. He was always part of a large group of friends and always up to fun and mischief. He thought it was a great idea to take the tractor with a loaded manure spreader to school, so he could quickly spread that on the field during his lunch hour. Not everybody was impressed. He ran the farm for a few years after his parents and sister moved to Whitemouth, Manitoba. In 1997, he moved to Heartwell, Nebraska with his young family of three children. The fourth child, Joanna, was born there. He built a dairy barn close to Heartwell and Nebraska became home, cowboy boots his preferred footwear. His friends there know him as Geert. You saw him coming in his pick-up truck with the license plate MMM MILK. His children grew up in Nebraska, going to school in Minden. Despite being busy, he made time to be part of their activities and go to their T-ball games, cheerleading, band and dance recitals. The cows left, but Geert remained in farming and doing custom baling. Nebraska is still home. Correspondence can be sent to Sikkenga family, 1535 40th road, Heartwell NE, 68945

The family of Geert-Jan Sikkenga created this Life Tributes page to make it easy to share your memories.

Geert-Jan Sikkenga, 49, of Heartwell, passed away on November...

Send flowers to the Sikkenga family.