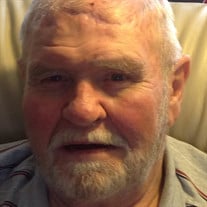 Gene A. Frerichs, 79, of Kearney, formerly of Minden, passed away on Tuesday, January 23, 2018 at St. John’s Good Samaritan Center in Kearney. Funeral Services will be held at 11:00 a.m. on Saturday, January 27, 2018 at Bethany Lutheran Church in Minden with the Rev. Donald Hunzeker officiating. Interment will be held at 1:30 p.m. on Saturday, January 27, 2018 at the Hildreth Cemetery. Visitation will be held from 4:00 to 6:00 p.m. on Friday, January 26, 2018 at Craig Funeral Home in Minden. Craig Funeral Home is in charge of the arrangements. Gene Arlyn Frerichs was born on April 9, 1938 in Holdrege to John G. and Leona A. (Warnken) Frerichs. He attended school in Hildreth, graduating with the class of 1955. Gene attended college at the University of Nebraska at Lincoln where he was a walk-on for the Nebraska Cornhusker football team. He later attended technical school at Milford. He was united in marriage to Barbara A. Pallesen on June 27, 1959 in Neligh, Ne and to this union four children were born: Arlyn, Scott, Sondra and Stacy. The family made their home in Holdrege and Minden where Gene owned and operated several service stations and mechanics garages before going to work with the start-up crew of Becton Dickinson in Holdrege. Gene retired from BD in 1994, after working there for over 35 years. Gene had a strong work ethic, often times having more than one job as well as mowing over 40 lawns around the Minden area. Barb passed away in 2013. Gene moved to Kearney in 2014. Gene was a member of Bethany Lutheran Church in Minden and enjoyed attending First Lutheran Church after moving to Kearney. He was a longtime member of the Minden Car Club, and enjoyed gardening, working on cars and attending coffee club at McDonalds. He was an avid stock-car racer and greatly enjoyed traveling with Don Smith, Jr. to various racing events around the country. He leaves to mourn his passing, his son, Scott Frerichs and wife Michelle of Kearney; daughter, Stacy Darveau and husband Scott of Kearney; four grandchildren, Samantha Neeman and husband Jake of Lincoln, Brianna Moran and husband Steven of Kearney and Ryan Darveau and Megan Darveau of Kearney; three great-grandchildren, Payton, Parker and Lennon; brother, Russ Frerichs and wife Kris of Seattle, WA as well as a host of other relatives and friends. Gene was preceded in death by his parents, his wife Barb, son Arlyn and daughter, Sondra both during infancy. Memorials are suggested to Bethany Lutheran Church in Minden or to First Lutheran Church in Kearney.

The family of Gene A. Frerichs created this Life Tributes page to make it easy to share your memories.