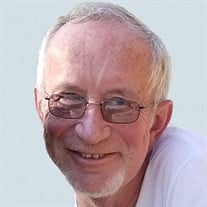 Gene Hendricks, 72, of Campbell, passed away peacefully surrounded by family on Wednesday, March 4, 2020, at Mary Lanning Healthcare in Hastings. Funeral services will be held at 10:00 a.m. on Monday, March 9, 2020 at Westminster United Presbyterian Church in Campbell with Rev. Mark Diehl officiating. Interment will be held at Riverton Cemetery following services. Visitation will be held from 4:00 to 6:00 p.m. on Sunday, March 8, 2020 at the church. Memorials in Gene’s honor are kindly suggested to the family for later designation. Craig Funeral Home is in charge of arrangements. Gene was born on December 8, 1947 in Kearney to Ray and Phyllis Hendricks. He grew up in the Minden area and attended school in Minden. He later attended Kearney State College and Central Community College obtaining a degree in Architecture. He was united in marriage to Sherry Clements on February 19, 1984 in Minden. The family made their home in Campbell. He was employed by the United States Postal Service for 42 years working in Minden and Grand Island, and later becoming postmaster in Campbell. Gene enjoyed reading, spending time outdoors, watching college sports; especially Duke Basketball, grilling, spending time at the river and camping. He loved spending time with his grandchildren and family. Those left to cherish his memory include: his wife, Sherry of Campbell; son, Kris (Brooke) Hendricks of Grand Island; daughter, Jill (Matt) Brodbeck of Grand Island; grandchildren, Kason and Madden Hendricks, Ellie and Koby Brodbeck; as well as a host of extended relatives and friends. He was preceded in death by his parents; in-laws, Evelyn and Roy Clements; grandson, Hudson Hendricks; nephew, Steve Jakubowski; great-nephew, Kameryn Bluford. Tributes and memories can be shared with the family at www.craigfunerals.com.

Gene Hendricks, 72, of Campbell, passed away peacefully surrounded by family on Wednesday, March 4, 2020, at Mary Lanning Healthcare in Hastings. Funeral services will be held at 10:00 a.m. on Monday, March 9, 2020 at Westminster United... View Obituary & Service Information

The family of Gene R. Hendricks created this Life Tributes page to make it easy to share your memories.

Send flowers to the Hendricks family.