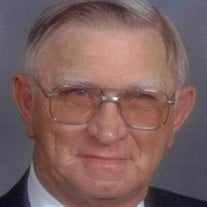 Gene A. Osterbuhr, 78, of Minden, passed away on Wednesday, November 22, 2017 at his home. Funeral Services will be held at 10:30 a.m. on Saturday, November 25, 2017 at the St. Paul Lutheran Church in Minden with the Rev. Christopher Hazzard and Rev. Don Becker officiating. Interment will be held following services at the Minden Cemetery. Visitation will be held from 3:30 to 5:30 p.m. on Friday, November, 24, 2017 at the Craig Funeral Home in Minden. Craig Funeral Home is in charge of the arrangements. Gene Arlen Osterbuhr was born on November 27, 1938 at the family farm near Hildreth, NE to John O. and Wilhelmina “Dora” (Tobiassen) Osterbuhr. He grew up in the Hildreth area and graduated from Hildreth High School. He then entered the United States Army National Guard on March 25, 1957. He faithfully served his country until being honorably discharged on February 28, 1963. Gene was united in marriage to Patricia Kauffelt on July 3, 1960 in Minden, NE and to this union, one son, Arlen was born. The family made their home in the Minden area where Gene was employed by the Central Nebraska Public Power and Irrigation District. He retired from that position after 39 years. He was a member of the St. Paul Lutheran Church, a charter member of the Minden Optimist Club and was also on the Minden Men’s Bowling League. Gene’s hobbies included: woodworking, hunting, bowling, watching NASCAR, traveling and spending time with friends and family. Gene’s grandchildren and great-grandchildren were the joy of his life. Those left to cherish his memory are his wife, Patricia; son, Arlen and wife Nancy Osterbuhr of Minden; two grandchildren, Nicholas and wife Brittney Osterbuhr of Holdrege and Alison and husband Seth Pearson of Kennard; two great-grandchildren, Brooks Osterbuhr and George Pearson; sister, Karen Ingram of Minden; brother-in-law and sister-in-law, Ralph and Joanne Lammers of Arapahoe, as well as a host of nieces, nephews, other relatives and friends. He was preceded in death by his parents; brother, Dwaine Osterbuhr and sister-in-law, Janet Osterbuhr and brother-in-law and sister-in-law, Don and Gloria Vannier. Memorials are suggested to the Minden Volunteer Fire & Rescue Department, St. Paul Lutheran Church in Minden, or to the charity of the donor’s choice.

Gene A. Osterbuhr, 78, of Minden, passed away on Wednesday, November 22, 2017 at his home. Funeral Services will be held at 10:30 a.m. on Saturday, November 25, 2017 at the St. Paul Lutheran Church in Minden with the Rev. Christopher Hazzard... View Obituary & Service Information

The family of Gene A. Osterbuhr created this Life Tributes page to make it easy to share your memories.

Gene A. Osterbuhr, 78, of Minden, passed away on Wednesday, November...