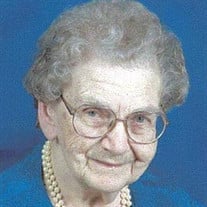 Genevieve I. E. Osborn, 96, of rural Axtell, passed away on October 18, 2017 at her home northwest of Axtell. Funeral services will be held at 3:00 p.m. on Monday, October 23, 2017 at Trinity Lutheran Church in Axtell with the Rev. Gale Dorn officiating. Interment will be held following services at Pleasant Hill Cemetery in Axtell. Visitation will be held from 4:00 to 6:00 p.m. on Sunday, October 22, 2017 at the Craig Funeral Home in Minden. Craig Funeral Home is in charge of the arrangements. Genevieve I.E. (Gustafson) Osborn was born on the Johnson family home place northwest of Axtell on December 27, 1920 to Alvin A. and Hilfrid (Johnson) Gustafson. She attended rural school district #39, Axtell High School and later graduated from Kearney State College before continuing her education at the University of Colorado. She taught high school Home Economics and music classes at Lodgepole and Paxton, NE. During that time she met her future husband, Kenneth B. Osborn, and on June 27, 1954 the couple was married at Trinity Lutheran Church in Axtell. To this union, two children were born: Alvin and Diann. The family moved from Paxton to Axtell in 1956. While living in Axtell, Genevieve devoted her time to teaching the handicapped at Bethpage Mission (now Mosaic) how to make woven loom rugs. Kenneth passed away in 2008. She was a lifelong member of Trinity Lutheran Church where she also served as the Organist for over 40 years. She also taught private piano lessons for many years to several children in her home. Genevieve enjoyed sewing and making home cooked meals for her family. In 2008 she was diagnosed with Macular Degenerative Disease in both eyes and became more dependent on her daughter and her family. In August of 2013 her daughter began caring for her and in February of 2014 Genevieve moved back to the family home place where she lived with her daughter and her family where they devoted their life to caring for her. Survivors include her daughter, Diann Wackerla and husband Bob; granddaughters, BethAnn Wackerla, BreAnn Wackerla, Angela Koch and husband Michael, and Monica Pollet; nine great-grandchildren; daughter-in-law, Edie Osborn, as well as a host of other relatives and friends. She was preceded in death by her parents; husband, Kenneth; son, Alvin Osborn and daughter-in-law, Linda Osborn. Memorials are suggested to Trinity Lutheran Church in Axtell or to Mosaic at Bethpage in Axtell.

Genevieve I. E. Osborn, 96, of rural Axtell, passed away on October 18, 2017 at her home northwest of Axtell. Funeral services will be held at 3:00 p.m. on Monday, October 23, 2017 at Trinity Lutheran Church in Axtell with the Rev. Gale Dorn... View Obituary & Service Information

The family of Genevieve I.E. Osborn created this Life Tributes page to make it easy to share your memories.

Genevieve I. E. Osborn, 96, of rural Axtell, passed away on October...

Send flowers to the Osborn family.