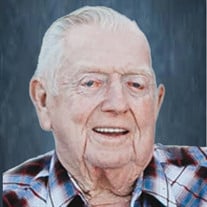 George L. Joyce, 81, of Heartwell, passed away on Tuesday, May 11, 2021 at Kearney County Health Services in Minden. A Funeral Mass will be held at 10:30 a.m. on Friday, May 21, 2021 at Holy Family Catholic Church in Heartwell with Fr. Julius Tvrdy officiating. The service will be streamed to the funeral home’s Facebook page. A memorial book signing will be held from 3:00 to 5:00 p.m. with the family present from 4:00 to 5:00 p.m. on Thursday, May 20, 2021 at the Craig Funeral Home in Minden. Rosary services will be held at 7:00 p.m. on Thursday, May 20, 2021 at Holy Family Catholic Church in Heartwell. It was George’s wish that private family interment be held at Holy Family Catholic Cemetery near Heartwell, prior to all services. In lieu of flowers, memorials are kindly suggested to the family for later designation. Craig Funeral Home in Minden is in charge of the arrangements. George was born on March 21, 1940 in Minden, Nebraska to Myran and Georgiana (Porterfield) Joyce. He grew up in the Heartwell area and attended Kenesaw Public Schools. He faithfully served his country with the United States Army, being inducted in 1963 and honorably discharged in 1965. George was united in marriage to Velma G. Higgins on January 10, 1970 in Hastings, and to this union, two children were born: Darcie and Tad. The family made their home near Heartwell, where George spent many years operating the family farm. George was a member of the Holy Family Catholic Church where he served in various capacities throughout his life. He was also member of the American Legion. George enjoyed classic cars, fishing, and was a dedicated Minden Whippet fan. George loved spending time with his family, especially his grandchildren. With the addition of each grandchild, the sparkle in his eyes grew brighter from the joy they brought to his heart. Those left to cherish his memory include his wife, Velma Joyce of Heartwell; daughter, Darcie Reed and husband, Kevin of Heartwell; son, Tad Joyce and wife, Sara of Heartwell; grandchildren, Nolan Reed, Arabella Reed, Landry Joyce, and Laynee Joyce; brother, William Joyce of Oklahoma; sisters-in-law and brothers-in-law; as well as a host of nieces, nephews, other relatives and close friends. He was preceded in death by his mother, Georgiana Joyce; step-mother, Ann (Debus) Joyce; and father, Myran Joyce. Tributes and memories can be shared with the family at www.craigfunerals.com.

George L. Joyce, 81, of Heartwell, passed away on Tuesday, May 11, 2021 at Kearney County Health Services in Minden. A Funeral Mass will be held at 10:30 a.m. on Friday, May 21, 2021 at Holy Family Catholic Church in Heartwell with Fr.... View Obituary & Service Information

The family of George L. Joyce created this Life Tributes page to make it easy to share your memories.