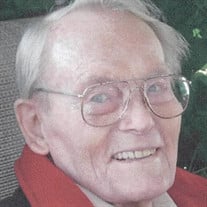 George Piester, 98, of Minden passed away on Friday, May 11, 2018 at Bethany Home in Minden. Funeral services will be held at 10:00 am. on Thursday, May 17, 2018 at the Westminster United Presbyterian Church in Minden with the Rev. Daniel Davis officiating. Interment will be held following services at the Minden Cemetery. Visitation will be held one hour prior to service times at the church. George was born May 30, 1919 to Jacob and Katherine Elizabeth Piester in Nisland, South Dakota. George was the 7th of 9 children. His family farmed in South Dakota until 1925, when they moved to Gering, Nebraska. They farmed there until moving to Lexington, Nebraska in 1929. George attended school in Dawson County and graduated from Lexington High School in 1938. In July of 1939 he married Lois A. Lemmon of Cozad, Nebraska. They made their home in Lincoln, Nebraska. To this union three sons were born: Thomas, Kent, and David. They were married forty years until her death in 1979. George was employed by Gooch Mill & Elevator Co. in Lincoln until late 1944. One of his memories of working at Gooch was that on June 6, 1944, “D-Day”, George’s boss Lloyd Graham, handed George a cable and told him to climb the pole on top of the elevator to secure the cable so they could fly the American flag. Back then, if your boss asked you to do something, you did it without question. George climbed to the top of the pole, hanging by one hand 200 feet above the ground and secured the cable. When told about it, his wife, Lois, questioned his sanity. In 1944, George and his family moved to Hemingford, Nebraska. George became the manager of the Hagemeister Elevator for over a year. In 1945 they lived for a short time in Seward, then moved to Minden in April, 1946. George and Lois purchased the F.F. Rogers Grain Elevator in Minden in March, 1946. Both worked together to run the business, which was the beginning of Piester Grain Company, Inc. The business grew and George introduced several farm services to Kearney County. He became a livestock feed dealer; he introduced the custom mixing and spreading of dry fertilizer; and he began selling anhydrous ammonia in 1949, the fourth such dealer in Nebraska. Lois was the bookkeeper for the business in its early years, and continued as secretary of the corporation until her death. Their sons served as the board of directors. George started Piester Manufacturing Company in 1963. He was awarded patents from the United States Patent Office for his N-P-K dry fertilizer spreader and for his invention of tops for rail hopper cars so they could be used to haul grain, both in 1963. In addition to the fertilizer spreaders, the manufacturing company produced grain augers, throwers, and tenders; one auger was sold to a buyer in Turkey. George ran the manufacturing company for thirty years. George was also active in the Minden community. He served as president of the Chamber of Commerce, and elder in both the First and the Westminster Presbyterian Churches, and a member of the volunteer fire department for 27 years. He was a member of the Minden School Board for 8 ½ years, and was a member of the Rotary Club since 1948. He was elected Mayor of Minden in 1994, and served two terms, during which he was instrumental in establishing what is now known as West Minden Estates, a source of great pride for him. George also served as a member of the Nebraska Fertilizer and Chemical Board for six years, serving as president for one year, and as a member of the National Anhydrous Ammonia Board for three years. George was an avid golfer and sports enthusiast. When their sons were in high school, George and Lois frequently took the coaches’ wives to basketball and football games. He loyally followed the Whippets athletic contests. He also attended most University of Nebraska home football games for over fifty years. George married LaVada Layton Piester in 1980. They shared fourteen years of marriage until her death following a courageous battle with cancer. George loved his life, and said that while he made a good living, he never got rich. George is survived by: Son Kent and wife Janet of Houston, Texas; son David and wife Cindy of Lincoln, sisters Elizabeth Piester of Denver, Colorado; and Lydia Hubach of Fremont, California; step-daughters Diana Felzein of Little Rock, Arkansas, Marcy and husband Don Cochran of Loveland, Colorado, Deb and husband Dick Schwenka of Minden, and Candy and husband Jack Kimple of Minden; nine grandchildren, 23 great grandchildren, one great, great grandchild; 10 step grandchildren, 12 step great grandchildren, and many nephews and nieces, and friends. George was preceded in death by: wife Lois, wife LaVada, son Tom, brothers Jacob, Henry, and Fred; sisters Eva Greenwalt, Katherine Bauer Mathiason, and Mary Uecker, and brothers-in-law Alex Greenwalt, Cecil Bauer, Jerry Uecker, and George Hubach. In lieu of flowers, memorials are suggested to the Minden Opera House Endowment Fund c/o Minden Exchange Bank, P.O. Box 179, Minden , NE 68959. Tributes of memory can be shared with the family at craigfunerals.com Craig Funeral Home is in charge of the arrangements.

George Piester, 98, of Minden passed away on Friday, May 11, 2018 at Bethany Home in Minden. Funeral services will be held at 10:00 am. on Thursday, May 17, 2018 at the Westminster United Presbyterian Church in Minden with the Rev. Daniel... View Obituary & Service Information

The family of George Piester created this Life Tributes page to make it easy to share your memories.

Send flowers to the Piester family.