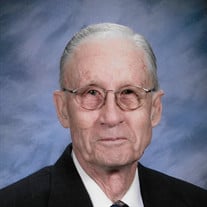 Gerald Peter Christensen, 90 years of age from Kearney, formerly of Hildreth died on Monday, January 23, 2017 at Mt. Carmel in Kearney. Funeral services will be on Thursday, January 26, 2017 at 2:00 p.m. at the Trinity Lutheran Church in Hildreth with Reverends Patti and Steve Byrnes officiating. Burial will be in the Hildreth Cemetery. Visitation will be at the Layton-Craig Funeral Home in Minden on Wednesday from 5-7 p.m. Gerald, son of Peter Christen and Caroline Christine (Nielsen) Christensen was born April 10, 1926 in Minden. He went to country school up to 8th grade. Gerald was in the Army at Ft. Hood at Killeen, TX and came back and farmed with his dad. On June 29, 1949 he married Janice Christine Loschen near Hildreth. He and his wife lived and farmed southwest of Minden until they moved into Hildreth in 1980. He retired in 1989. Gerald enjoyed fishing and boating, flying an airplane, playing four-point pitch and being a “Winter Texan.” He always wanted the kids and grandkids to know it was very important to be honest. Gerald was a member of Trinity Lutheran Church, Elks Club and past member of Hildreth Lions Club where he enjoyed helping with the tractor pull. He had served on the Keene Coop Board. Memorials are suggested to the Fredericksburg Lutheran Cemetery, the Hildreth Cemetery, or the donor’s choice. Survivors include daughter, Debra Slack and husband Roger of Gibbon, son Brian and wife Brenda of Port Lavaca, TX; grandchildren Cristopher Slack and wife JaLena, Michael Slack and wife Kerri, Patrick Slack and wife Jennifer, Peggy Schmidt and husband Jordan, Aaron Christensen and Todd Christensen; seven great grand daughters Samantha and Libi Slack, Jackie and Jordan Clement, Ashlyn Dealey, Katelynn and Adelynn Slack and sisters in law, June Loschen of Alma and Sharron Loschen of Kearney, Carolee Whipple and husband Kerry of Blue Hill and brother in law Roger Loschen and wife Sharon of Kearney. He was preceded in death by wife, Janice in 2004, his parents and infant brother, Ralph; brothers in law, Gerald Loschen and Gordon Loschen and sister in law, Gloria Hinson.

Gerald Peter Christensen, 90 years of age from Kearney, formerly of Hildreth died on Monday, January 23, 2017 at Mt. Carmel in Kearney. Funeral services will be on Thursday, January 26, 2017 at 2:00 p.m. at the Trinity Lutheran Church in Hildreth... View Obituary & Service Information

The family of Gerald P. Christensen created this Life Tributes page to make it easy to share your memories.