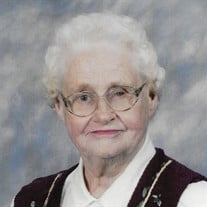 Geraldine Elivera “Gerry “ Gustafson, 89 years of age from Kearney, NE, formerly of Funk, NE passed away peacefully to her eternal home to complete her journey at Mt. Carmel Home in Kearney on January 18, 2017. Celebration of Life Services will be on Wednesday, January 25, 2017 at 11:00 a.m. at the Fridhem Lutheran Church in Funk, NE with Rev. Darrel Wissmann officiating. Burial will be prior to the Celebration of Life service at the Fridhem Lutheran Cemetery. Visitation will be at the Layton-Craig Funeral Home in Minden on Tuesday from 4-6 p.m. Geraldine was born on July 5, 1927 in Omaha, NE to Carl and Hedwig (Swanson) Nelson. She attended school in the Omaha area and graduated from Tech High School in 1947. After graduation she worked at Craft Guild, a trophy maker company. Geraldine went on a blind date with a central Nebraska farmer. On September 18, 1953 she was united in marriage to Harold E. Gustafson at the Kountz Memorial Lutheran Church. To this union three daughters were born; Anita, Joan and Judy. Geraldine was an active farmer's wife, a loving mother and enjoyed the company company of her many puppy dogs over the years. She was active in the Friendship Circle, NRG, Women's Circle at the Fridhem Church, Tre Kroner Society and she and her husband were honorary Swedes in 1997. She was an avid gardener, loved flowers and always had a joke to tell. She was one of the few that loved going to the grocery store. Geraldine truly enjoyed her trips to HyVee. Survivors include her daughters, Judy of Funk and Joan Epping and husband, Darrell of Funk; her two grand dogs, Raider and Ruger; brother, Cliff Nelson of Sacremento, CA; sister in-law, Deloris Gustafson of Funk and many nieces, nephews and lot her relatives. She is preceded in death by her husband, Harold, daughter, Anita, her parents, brother, Raymond Nelson and sister in-law, Mildred, sister in-law, Connie Nelson and brother in-law, Carl A.A. Gustafson.

Geraldine Elivera &#8220;Gerry &#8220; Gustafson, 89 years of age from Kearney, NE, formerly of Funk, NE passed away peacefully to her eternal home to complete her journey at Mt. Carmel Home in Kearney on January 18, 2017. Celebration of Life... View Obituary & Service Information

The family of Geraldine "Gerry" Gustafson created this Life Tributes page to make it easy to share your memories.

Send flowers to the Gustafson family.