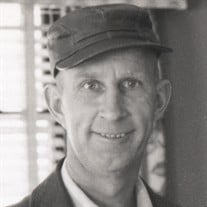 Gilbert Victor Nelson, 97, of Minden, Nebraska passed away on Sunday, February 18, 2018 at St. John’s Good Samaritan Society in Kearney. Funeral services will be held at 10:30 a.m. on Saturday, February 24, 2018 at the Minden United Methodist Church with the Rev. Paul Blanchard officiating. Interment will follow services in the Minden Cemetery. Visitation will be held from 4:00 to 6:00 p.m. on Friday, February 23, 2018 at the Craig Funeral Home in Minden. Gilbert was born on March 28, 1920 to Henry V. and Christine (Raun) Nelson in Kearney County, Nebraska. He graduated from Minden High School with the class of 1938. On September 9, 1942, Gilbert joined the United States Army. After training, he joined the 7th Infantry Division for the remainder of World War II. He would spend the rest of his life during the war in the Pacific. He was twice wounded and received two Purple Heart Medals for this. He was always very proud to have served his country. Coming home from the war, he returned to farming for the rest of his life. In the spring of 1954, he bought his first new tractor, a Farmall Super MTA from the IH dealer in Campbell, Nebraska. He also fell in love with the love of his life, Myra May Woods, a school teacher, and the two married on March 16, 1946. Gilbert enjoyed going on short road trips into Kansas to see friends he had known through the years. Survivors include his sons, Dave Nelson of Minden and Gregg Nelson of Woodlands, TX; two grandchildren, Bradley Nelson of Centennial, CO and Lezlie Allen and her husband Lance of Littleton, CO; great-grandchildren, Jake and Ross Garrett; step-great-grandchildren, Bentley and Brodie Allen. He was preceded in death by his parents, his wife Myra in December of 2017, brothers, Harlan Nelson and Dennis Nelson; sisters, Merna Rewerts and Maurine Eckloff. Memorials are suggested to the Minden United Methodist Church or to the Minden American Legion Post #94. Craig Funeral Home is in charge of the arrangements.

The family of Gilbert V. Nelson created this Life Tributes page to make it easy to share your memories.

Gilbert Victor Nelson, 97, of Minden, Nebraska passed away on...