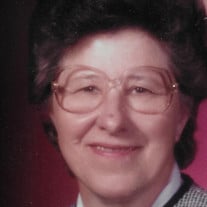 Gladys Marie Jurgens, 92 years of age from Minden died on Friday January 27, 2017 at Kearney County Long Term Care in Minden. Services will be Monday, January 30, 2017 at 11:00 p.m. at Trinity Lutheran Church in Hildreth with Revs. Steve and Patti Byrne officiating. Burial will be in the St. Peter’s Cemetery in Hildreth. Gladys was born December 1, 1924 to Fred and Louise (Hundt) Thurnau at Campbell, Nebraska. She graduated in 1942 from Campbell High School. After graduation she received her teaching certificate and taught country school. She was united in marriage to Don Jurgens on October 9, 1944 in Stutgard, KS. To this union five sons were born: Gary, Rodney, Kendall, Neil, and Norman. Gladys and Don farmed in the Hildreth-Wilcox area until 1984 when they retired after Don fell ill. They then moved to Wilcox where Gladys resided until she became ill in November 2011. She then moved to Kearney County Long Term Care until her passing. She leaves to mourn her passing, sons, Rodney and wife Rita of Wilcox, Kendall of Wilcox; daughters-in-law Carol Jurgens of Bellevue, Mary Jurgens of Minden, and Sonja Jurgens Woolery of Kansas City; sisters Doris Ruhs of Loveland, CO, and Loretta Fierstein of Ravenna; 13 grandchildren, 4 step grandchildren, 22 great grandchildren and several nieces and nephews. She was preceded in death by her husband Don; three sons Gary, Neil, and Norman; daughter-in-law Ann Jurgens; her parents; sister Alma Todd; and half-sister Engle Maria Hasemann.

The family of Gladys Jurgens created this Life Tributes page to make it easy to share your memories.