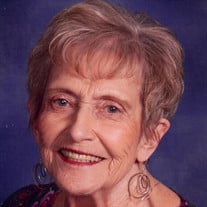 Glendora Grace Peterson, 85, of Minden, passed away on Tuesday, March 6, 2018 at Bethany Home in Minden. Memorial services will be held at 10:00 a.m. on Friday, March 9, 2018 at the St. Paul Lutheran Church in Minden with the Rev. Christopher Hazzard and Rev. Don Becker officiating. Inurnment will follow services at the Minden Cemetery. Memorial book signing with the family present will be held from 4:00 to 6:00 p.m. on Thursday, March 8, 2018 at the Craig Funeral Home in Minden. Glennie was born on March 20, 1932 in Wakefield, NE as the middle child of Henry and Edith (Brammer) Wieting. She grew up in the Wakefield and Wayne area. She was baptized, confirmed and married at the Immanuel Lutheran Church in Wakefield. During her earlier years, she attended parochial school in Wakefield, and later graduated from Wakefield High School with the class of 1949. After graduation, she moved to Minden, where her older sister Delores was living. On April 20, 1951, Glennie was united in marriage to Donald Ray Peterson in Wakefield. The couple was blessed with five children: Timothy Ray, Carmel Sue, Krista Rae, Jason Thomas and Dena Rae. While living in Minden, she worked at Berndt Pharmacy. Donald served in the Air Force and they were stationed in Texas for a while before returning to Minden. The family then moved to Sargent, NE to open a grocery store business. They owned several stores in Sargent including Peterson’s Thriftway and Peterson’s Jack and Jill between 1954 and 1979. The family also helped start the Peace Lutheran Church in Sargent. The couple later divorced. Glennie and the younger children (Jason and Dena) moved to Minden where she was employed as the Deputy Clerk for Kearney County and also worked at Mason’s Supermarket. She retired in 1995. On July 4, 1997, she married John L. Zoeller of Manhattan, KS. Glennie and John lived in Manhattan and Wamego, KS until returning to Minden in 2004. John passed away on February 10, 2011. Glennie enjoyed her family, cooking, boating with John and crocheting Afghans for her friends and family. Those left to cherish her memory include her children and spouses, Tim Peterson of Omaha, Krista (Brad) Tophoj of Grand Island and Dena (David) Beck of Minden; step-daughters, Kathy (Jim) Loftin of Lenexa, KS, Victoria (Gary) Pener of Overland Park, KS and Lori Gasaway (Bill) of Olathe, KS; step-son-in-law, Don Stark of Louisburg, KS; 20 grandchildren and 12 great-grandchildren; sister, Sandra Schepler of Kearney as well as a host of nieces, nephews, other relatives and friends. She was preceded in death by her parents; husbands, Donald Peterson and John Zoeller; daughter, Carmel Sue; son, Jason Thomas; sister, Delores Wright; brothers-in-law, Donald Wright and Merle Schepler and step-daughter, Janet Stark. Memorials are suggested to Bethany Home or St. Paul Lutheran Church in Minden. Craig Funeral Home is in charge of the arrangements.

Glendora Grace Peterson, 85, of Minden, passed away on Tuesday, March 6, 2018 at Bethany Home in Minden. Memorial services will be held at 10:00 a.m. on Friday, March 9, 2018 at the St. Paul Lutheran Church in Minden with the Rev. Christopher... View Obituary & Service Information

The family of Glendora "Glennie" Peterson created this Life Tributes page to make it easy to share your memories.

Glendora Grace Peterson, 85, of Minden, passed away on Tuesday,...

Send flowers to the Peterson family.