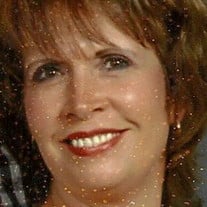 Gloria D. Becker, 63, of Minden, NE passed away on January 1, 2018 at the Nebraska Medical Center in Omaha, NE. Memorial services will be held at 11:00 am on Thursday, January 11, 2018 at Westminster United Presbyterian Church in Minden with Reverend Daniel Davis and Reverend Berke Landrum officiating. Private family burial will take place at a later date. There will be no visitation as the family is honoring Gloria’s wish to be cremated. Craig Funeral Home is in charge of the arrangements. Gloria was born on August 8, 1954 in Danbury, NE to Richard and Vera (Lewis) Remington. She grew up in McCook, NE and graduated from McCook Senior High School. Most of Gloria's working career was spent in the entertainment sales industry; first at KZMC radio in McCook and then at KSNK TV in Oberlin, KS. During her tenure at KSNK TV, she was promoted to station manager where she worked until making the decision to stay at home to raise her daughter, Ashley, who was born in 1991. On June 23, 1995, she was united in marriage to Dr. Jon Becker of Cambridge, NE. The family lived in Cambridge for many years providing therapeutic foster care for children in need. After many years of providing foster care, Jon & Gloria adopted their two sons, Michael & Mathew, and moved to Minden, NE in 2002. While in Minden, she was an active member of the Westminster Presbyterian Church, serving as an elder and on the pastor nominating committee and, during her spare time, she enjoyed volunteering at the Minden Opera House. Most recently, Gloria was employed by Lutheran Family Services, helping to mentor adoptive parents throughout their own foster care and adoption journeys. Most importantly, her life revolved around her family, particularly her children. Whether attending sporting events, theater productions or speech meets, her love for her kids was always paramount. Survivors include her husband, Jon; daughter, Ashley; sons, Michael and Mathew; and brother, David Remington, as well as a host of other relatives and friends. Gloria is preceded in death by her parents, Richard & Vera Remington. Memorials are suggested to the family for later designation.

Gloria D. Becker, 63, of Minden, NE passed away on January 1, 2018 at the Nebraska Medical Center in Omaha, NE. Memorial services will be held at 11:00 am on Thursday, January 11, 2018 at Westminster United Presbyterian Church in Minden... View Obituary & Service Information

The family of Gloria D Becker created this Life Tributes page to make it easy to share your memories.

Send flowers to the Becker family.