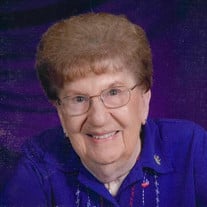 Gloria J. Rahmann Beach, 87, of Hildreth, passed away on Monday, January 6, 2020 at Bethany Home in Minden. Funeral services will be held at 10:30 a.m. on Saturday, January 11, 2020 at the Trinity Lutheran Church in Hildreth with the Rev. Kari Foss officiating. Interment will be held following services at the Hildreth Cemetery. Visitation will be held from 4:00 to 7:00 p.m. on Friday, January 10, 2020 at the Craig Funeral Home – Jelden Chapel in Hildreth. Memorials in Gloria’s honor are kindly suggested to the Hildreth Volunteer Fire Dept., the Hildreth Senior Center or to Trinity Lutheran Church in Hildreth. Craig Funeral Home is in charge of the arrangements. Gloria was born on June 9, 1932 in Sargent, Nebraska to James and Josie (Eret) Bratka. She grew up in the Burwell area and graduated from Burwell High School in 1949. Gloria also graduated from St. Anthony’s College of Nursing as a Licensed Practical Nurse. She worked at Good Samaritan Hospital for a time. On August 9, 1956 she married Everett Rahmann and they moved to Hildreth. Gloria worked as a private care nurse in Minden and in Hildreth for many years. Later Gloria became the director of the Golden Years Center in Hildreth and held that position for 22 years. Everett died in 1984. Gloria later married Gusty Beach on October 19, 1991. Gusty died in 2002. Gloria was a member of the Trinity Lutheran Church in Hildreth and the Hildreth VFW Auxiliary. She enjoyed playing cards, dancing, visiting with friends and helping out in the community and church. Survivors include her son, Tim Rahmann and wife, Myra of Gibbon; daughter, Sandra Tacha and husband, Lynn of Kearney; grandchildren, Ryan and Adrienne Rahmann of Cozad, Becky and Justin Meyer of St. Libory, and Matthew and Courtney Culler of Lincoln; five great grandchildren, Maya, Quinn and Kyndall Rahmann, Easton and Royce Meyer; step-grandchildren, Jenny Burkowski, Matt Tacha, and Julie Maynard; as well as a host of extended relatives and friends. Gloria is preceded in death by her two husbands; sister, Betty Clabaugh and brother, Bud Bratka. Tributes of memory can be shared with the family at www.craigfunerals.com.

Gloria J. Rahmann Beach, 87, of Hildreth, passed away on Monday, January 6, 2020 at Bethany Home in Minden. Funeral services will be held at 10:30 a.m. on Saturday, January 11, 2020 at the Trinity Lutheran Church in Hildreth with the Rev.... View Obituary & Service Information

The family of Gloria J. Rahmann Beach created this Life Tributes page to make it easy to share your memories.

Gloria J. Rahmann Beach, 87, of Hildreth, passed away on Monday,...