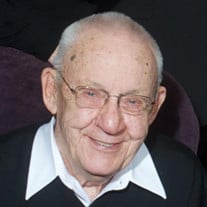 Gordon Wayne Petersen, 89, of Minden, Nebraska, passed away surrounded by love on Wednesday, November 7, 2018 at Bethany Home in Minden. A celebration of life service will be held at 11 a.m., Tuesday, November 13, at the Minden Evangelical Free Church with Pastor Tom Barnes officiating. Burial will follow at the Minden Cemetery. Friends are invited to visit with the family on Monday, November 12 from 5 to 7 p.m. at the Craig Funeral Home. In lieu of flowers, memorial donations may be sent to the Minden Evangelical Free Church, Minden Rotary Club or Bethany Home. Gordon was born on July 17, 1929, in Minden to Albert and Matilda (Nelson) Petersen. He grew up farming and graduated from Minden High School in 1947. On February 4, 1951, he married Rosalie Youngquist at the Stamford Christian Church in Stamford, Nebraska, and they proudly celebrated their 67th wedding anniversary this year. Gordon was a farmer through and through, farming first with his father, then with his sons, grandsons and dear friend Steve Fritson until his retirement, which coincides with his passing and one final harvest. He loved his Lord and Savior, Jesus Christ and was a member of the Minden Evangelical Free Church, where he served the Lord in various roles throughout the years. He was a member and past president of the Minden Rotary Club and also spent time serving on the Minden Public Schools’ Board of Education and Bethany Home Board of Directors and Foundation Board, and fondly remembered the people with whom he served. Music was a special hobby for Gordon, who sang and played the trumpet. In his early years, he traveled the region singing in a men’s gospel quartet. Later, he and Rosalie enjoyed square dancing with friends old and new alike. He was an avid sports fan who enjoyed cheering for the Minden Whippets, especially when his children and grandchildren were involved. Whether it was a nickname, hand signal or phrase, he picked a unique way to communicate his love for his kids and grandkids and his pride in their endeavors. Teasing others was one of Gordon’s trademarks, and the Supreme Commander always appreciated people with a good sense of humor, thankful there was an ample supply of them among his friends, neighbors and fellow fans in the stands. Gordon has been reunited in heaven with his mother, father, brother Sidney Petersen, brother-in-law Arlo Younguist, nephew Rick Petersen, niece Colleen Youngquist and granddaughter Angelica Petersen. He is survived by his wife, Rosalie; son Steve Petersen and his wife Anna of Minden; daughter Karen Blackerby of Minden and her husband Bob of St. Petersburg, Florida; son Brian Petersen and his wife Barb of Minden; daughter Amy Sturgis and her husband Rob of Omaha; 10 grandchildren: Ryan Petersen (and wife Lauren), Mark Petersen (and wife Michala), Brook Craig (and husband Jason), Carissa Palmberg (and husband Karl), Beau Blackerby, Kimberly White (and husband Mahlon), Bennett Petersen (and wife Chelsey), Bailey Petersen, Brianna Petersen and Brayden Petersen; 21 great-grandchildren: Vaughn, Leif and Finley Faith Petersen; Myka, Marlie, Merek and Maddyn Petersen; Paben, Kylin, Alyah and Rowan Craig; Russell, Ava, Nehemiah and Anna Palmberg; Madison, Noah and Grayson White; Bowen, Brynlee and Blair Petersen; sisters-in-law Garnette Doty of Duluth, Minnesota and Mary Youngquist of Orleans, Nebraska; nieces Patricia Hansen (and husband Keith), Rebecca Haapanen (and husband Len), Catherine Petersen, Rita Garner and Lynelle Youngquist; and several grand and great-grandnieces and nephews. Tributes of memory can be shared with the family at www.craigfunerals.com. Craig Funeral Home is in charge of the arrangements.

Gordon Wayne Petersen, 89, of Minden, Nebraska, passed away surrounded by love on Wednesday, November 7, 2018 at Bethany Home in Minden. A celebration of life service will be held at 11 a.m., Tuesday, November 13, at the Minden Evangelical... View Obituary & Service Information

The family of Gordon W. Petersen created this Life Tributes page to make it easy to share your memories.