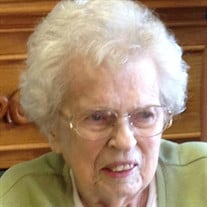 Obituary for Grace L Slack Grace L (Johnson) Slack passed peacefully from this life Monday, May 9 2016 in Minneapolis at the age of 99 years, surrounded by many family members. Grace was formerly of Minden, Nebraska. She was greatly loved by all who knew her. Many of her friends called her “Amazing Grace”. Graveside service will be on Thursday, July 14, 2016 at 10:30 a.m. at the Minden Cemetery with Mary Schukar officiating. There will be no visitation. Layton-Craig Funeral Home in Minden is in charge of arrangements. She was born in Minden, Nebraska to William and Stella Johnson on September 23, 1916. She was sister to Elmer, Merle and Gladys (Fred) Rasmussen. She graduated from Minden High School in the class of 1934. She was a member of the First Presbyterian Church in Minden, which later merged with the Westminster United Presbyterian Church and was active there in women’s groups and activities. On April 21, 1940 she married Reese N Slack, also of Minden. During WWII, while Reese was in the US Army in Europe, she ran the Conoco station on the corner of US Highway 634 and Nebraska Highway 10 Minden, across the street from what would later become Pioneer Village. Upon his return from Germany, they began a family that included Douglas J and Meredith L Slack. She had a full life and some of her proud pleasures were her children, grandchildren and great grandchildren. She and Reese loved to visit family and friends and enjoyed many hours of popular card games. She loved to play different card games and taught grandkids and great grandkids to play too. She continued socializing and playing cards after moving to Minneapolis in 2004. She had a great, long life and enjoyed many friendships. She is survived by son Douglas (LaDonna) Slack of Kalama, WA and daughter Meredith (John) Lundgren of Edina, MN. Grandson Jeff (Susan) Lundgren of Edina, Granddaughters Jill (Scott) Liebers of Farmington, Amy Lundgren of Minneapolis, Michelle Seward of Portland, OR and Kimberly (Tim) Olson of Aloha, OR. Great grandchildren include Brianna Lundgren, Amanda Olson, Emily Olson, Noah Liebers and Megan Liebers. She was loved by all and will be greatly missed. She will fondly be remembered as “Amazing Grace”.

Obituary for Grace L Slack Grace L (Johnson) Slack passed peacefully from this life Monday, May 9 2016 in Minneapolis at the age of 99 years, surrounded by many family members. Grace was formerly of Minden, Nebraska. She was greatly loved... View Obituary & Service Information

The family of Grace L. Slack created this Life Tributes page to make it easy to share your memories.

Send flowers to the Slack family.