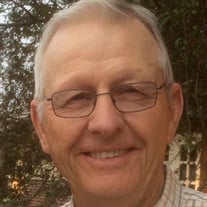 Haldine Phillip Johnson, 80, of rural Minden, passed away on Thursday, February 15, 2018 at his home. Funeral services will be held at 2:30 p.m. on Wednesday, February 21, 2018 at the Minden United Methodist Church with the Rev. Paul Blanchard officiating. Private family burial will be held prior to services at the Osco Cemetery with military honors provided by the Campbell American Legion Post # 169, Minden American Legion Post #94 and Heartwell Veteran’s of Foreign Wars Post in conjunction with the United States Marine Corps. Visitation will be held from 4:00 to 6:00 p.m. on Tuesday, February 20, 2018 at the Craig Funeral Home in Minden. Haldine was born on August 21, 1937 near Campbell, to Frank and Oveline (Roy) Johnson. He grew up in the Campbell area and received his education from the Pressley Country School and Campbell High School. He faithfully served his country with the United States Marine Corps from 1956-1958. He was united in marriage to Lyra Carlson on November 27, 1965 in Loomis. The couple lived in Grant Township and Kearney County where they raised four daughters. Haldine had a true love for farming and raising cattle. He was a member of the Minden United Methodist Church and was the Secretary for the Osco Cemetery Association for many years. He and his family were involved in the Saddle Tramps 4-H club for seventeen years. Haldine enjoyed restoring old tractors and 1926 and 1927 Model T Ford cars. Above all, his favorite pastime was spending time with his family and all of their activities. He leaves to mourn his passing, his wife, Lyra; daughters, Amy (Patrick) Campagna, Kimberly (Paul) Steen, Carla (Mark) Greisen and Libby (David) Crockett; grandchildren, Miles (Jenna) Steen, Olivia Steen, Lily Steen, Grace Campagna, Sophia Campagna, John Campagna, Elsie Crockett, Beatrix Crockett; brothers, Donald Johnson and Dale Johnson; sisters, Marjorie Johnson, Audrey Christensen and Janice Schell, as well as a host of nieces, nephews, other relatives and friends. Haldine was preceded in death by his parents and his Father and Mother-in-law, Fred and Dolly Carlson. Memorials are suggested to the Osco Cemetery Association, Minden United Methodist Church, or to the Kearney County Veteran’s Quilt Project. Craig Funeral Home is in charge of the arrangements.

Haldine Phillip Johnson, 80, of rural Minden, passed away on Thursday, February 15, 2018 at his home. Funeral services will be held at 2:30 p.m. on Wednesday, February 21, 2018 at the Minden United Methodist Church with the Rev. Paul Blanchard... View Obituary & Service Information

The family of Haldine P. Johnson created this Life Tributes page to make it easy to share your memories.

Haldine Phillip Johnson, 80, of rural Minden, passed away on...