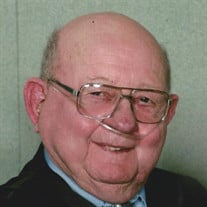 Harold L. Lempka, 81 years of age from Minden passed away peacefully at home in Minden surrounded by loved ones on Thursday, November 17, 2016. Funeral services will be on Monday, November 21, 2016 at 10:30 a.m. at the St. John’s Catholic Church in Minden with Father James Benton officiating. Burial will be in the Minden Cemetery with military honors provided by the Minden American Legion and the Heartwell VFW. Visitation will be at the Layton-Craig Funeral Home in Minden on Sunday from 3-5 p.m. Rosary will be recited at the church Sunday evening at 7:00 p.m. Memorials are strongly suggested to the St. John’s Catholic Church in Minden. Harold was born on March 3, 1935 in St. Mary’s, Nebraska to Theodore and Mary (Green) Lempka. He moved to Minden in 1951 and graduated from Minden High School in 1953. Harold served in the U.S. Army from 1958 until 1964. While in the army he was stationed in Verdone, France. Harold married Susan Miller on November 9, 1963 at the St. John’s Catholic Church in Minden. They made their home in Minden and raised their family. He worked for Miller the Driller and in 1984 he opened Minden Machine Shop. His sons, Larry and Kerry, now own Minden Machine Shop. He enjoyed fishing, gardening and spoiling his grandchildren. He loved spending time with his family, and they were very close. Survivors include his wife, Susan of Minden; his children, Teresa Dowling and husband, Michael of Sutherland, NE, Larry Lempka and wife, Allison of Minden, Sherri Kreutzer and husband, Tim of Roggen, CO, Gary Lempka and wife, Jill of Spokane, WA and Kerry Lempka and wife, Jolene of Minden; 15 grandchildren, Travis, Andrew, Emily, Samantha, Logon, Ty, and Heaven Dowling; Landon and Erin Lempka; Cody Trent and Lance Kreutzer; Blake and Reese Lempka; and Paige and Rebecca Lempka; two great grandchildren, Acenn and Axton Iverson; two brothers, Kenneth Lempka of Virginia and Mike Lempka of Missouri. He is preceded in death by daughter, Tammy and his parents.

The family of Harold L. Lempka created this Life Tributes page to make it easy to share your memories.

Send flowers to the Lempka family.