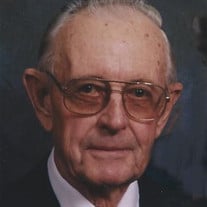 Harold Schurmann, 94 years of age from Minden, formerly of Hildreth died on Saturday, August 27, 2016 at Kearney County Health Services Hospital in Minden. Funeral services will be Thursday, September 1, 2016 at 11:00 a.m. at the Trinity Lutheran Church in Hildreth with Reverends Patti and Steve Byrnes officiating. Burial will be in the Hildreth Cemetery. Visitation will be at the Jelden-Craig Funeral Home in Hildreth on Wednesday from 4-6 p.m. Harold was born on February 2, 1922 on a farm one mile south of Hildreth to Andy and Fannie (Albers) Schurmann. He was baptized in the Lutheran faith by Rev. Hausman and confirmed in 1936 by Rev. H.L. Lenser. Harold attended Hildreth Public School and graduated in 1939. Harold was united in marriage to Violet Lindau on December 25, 1941 at the home of her parents by Rev. G.F.P. Duhrkop. To this union three children were born, Kent, Max and Cleo. Harold was engaged in farming until he retired in 1984. He and his wife lived on the farm a mile south of Hildreth until moving into Hildreth in 1964. He enjoyed farming and working in his shop. He was a member of the Trinity Lutheran Church. Memorials are suggested to the church, Hildreth Vol. Fire Dept., or the Hildreth City Park Fund. Survivors include son, Max Schurmann and wife, Terri of Hildreth; daughter Cleo Mitchell and husband, Mike of Marysville, WA; daughter in-law Merche Schurmann of Minden; seven grandchildren, Ryan Schurmann and wife, Shara of Minden, Sandra Sandoval and husband, Rubio of Grand Island, Maria Quinteros and husband, Roberto of Lexington, Troy Schurmann of Waverly, Brian Schurmann and wife, Angie of Fairmont, Curtis Mitchell and wife, Amanda of Austin, TX and Erin Magee and husband, Phillip of Irvine, CA; seven great grandchildren and a sister in-law, Zelma Lindau. He is preceded in death by his parents, younger brother, Dale, his wife, Violet and son, Kent, in-laws, Earl and Freda Lindau, Fern and Fred Warnken and Ora Lindau.

The family of Harold Schurmann created this Life Tributes page to make it easy to share your memories.

Harold Schurmann, 94 years of age from Minden, formerly of Hildreth...

Send flowers to the Schurmann family.