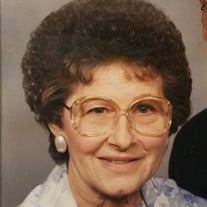 Harriet J. Jorgensen, 90, of Minden passed away on Wednesday, May 20, 2020 at Bethany Home in Minden. Celebration of life services will be held at 11:00 a.m. on Thursday, July 2, 2020 at the Westminster United Presbyterian Church in Minden with the Rev. Sharon Rees officiating. Inurnment will be held following services at the Minden Cemetery. Current recommendations for faith based services will be followed. There will be no visitation as the family has honored Harriet’s wish to be cremated. Memorials in Harriet’s honor are kindly suggested to the Westminster United Presbyterian Church in Minden. Craig Funeral Home is in charge of the arrangements. Harriet Jane Timm was born to William and Ethel (Keedle) Timm in Holstein, Nebraska on January 26, 1930. She was the second born out of seven children. She grew up with four brothers and two sisters: Vern, Gene, Wayne, Dale, Marilyn, and Shirley. At a young age, her father was killed in an accident as a mechanic. Her mother then moved Harriet and the children to Hastings, where she attended school. On June 23, 1945, she was united in marriage to Clair “Red” Sumstine and to this union three children were born; Michael, Margaret and Cheryl. The family made their home in Kenesaw, until moving to Minden in the 1950’s. Harriet began working at the 5 & Dime, and then began waitressing at the Pioneer Village Restaurant where she enjoyed working with all of the young high school kids and meeting all of the tourists that came into the restaurant. On February 17, 1978, Harriet married Gail Jorgensen, and they made their home on an acreage outside of Minden. They loved to travel with their 5th wheel, and would take it to Alaska, Canada, Arizona and California where they would winter. Throughout their travels, Harriet loved to go to flea markets, farm sales and Saturday night polka dances. She enjoyed flowers, butterflies and her cat “Baby”, who was a feral cat from the farm that Harriet tamed. Those left to cherish her memory include her son, Michael (Teresa) Sumstine of Minden; daughters, Margaret Jorgensen of Hastings, and Cheryl Timm of Washington; step-son, Tim Jorgensen of Evergreen, CO; eight grandchildren; five great-grandchildren; brothers, Wayne Timm of Hastings, and Dale (Lois) Schmidt of Arizona; as well as a host of nieces, nephews, other relatives and friends. She was preceded in death by her parents; husband Gail in 2011; granddaughter, Paulette Sumstine; brothers, Vern Timm, and Gene Timm; sisters, Marilyn Henry, and Shirley Fergus; and sister-in-law, Janice Timm. Tributes and memories can be shared with the family at www.craigfunerals.com.

Harriet J. Jorgensen, 90, of Minden passed away on Wednesday, May 20, 2020 at Bethany Home in Minden. Celebration of life services will be held at 11:00 a.m. on Thursday, July 2, 2020 at the Westminster United Presbyterian Church in... View Obituary & Service Information

The family of Harriet J. Jorgensen created this Life Tributes page to make it easy to share your memories.

Harriet J. Jorgensen, 90, of Minden passed away on Wednesday,...

Send flowers to the Jorgensen family.