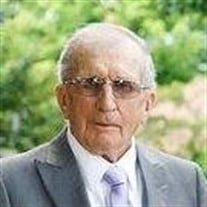 H. Richard “Dick” Schwenka, 82 years of age from Minden, NE died on Tuesday, July 5, 2016 at Kearney County Health Services-LTC in Minden. Celebration of Life services will be on Friday, July 8, 2016 at 4:00 p.m. at the Westminster United Presbyterian Church in Minden with Rev. Dan Davis and Father James Benton officiating. Burial will be in the Minden Cemetery prior to the celebration service. There will be no visitation. Layton-Craig Funeral Home is in charge of arrangements. Dick was born on December 30, 1933 in Minden, NE to Harry and Mabel (Hansen) Schwenka. Dick was baptized and confirmed in the catholic faith at the St. John’s Catholic Church in Minden. He grew up in the Minden area and graduated from Minden High School. On April 9, 1953 he married Donna Olsen in Minden, to this union four boys and two girls were born. They made their home in the Minden area and Dick farmed. In 1973 he purchased R.E. Olsen, a trucking business from his father in-law. In 1985 he sold Schwenka Trucking to his son, Don. Dick then worked at Farmer’s Union Co-op; and continued to drive truck for his son. Dick was a member of the Westminster United Presbyterian Church in Minden, Kearney County Feeders and Minden Country Club. He enjoyed golfing, an occasional trip to the horse races, and spending time with his family. Survivors include his wife, Donna of Minden; four sons and their spouses, Dick (Deb) Schwenka of Minden, Don (Linda) Schwenka of Minden, Dean (Mary Jo) Schwenka of Heartwell and Doug (Linda) Schwenka of Hastings; two daughters and their spouses, Denise (Chuck) Sinsel of Grand Island and Dee Ann (Tim) Higgins of Grand Island; 17 grandchildren; 17 great grandchildren and sister, Janet Benson of Minden. He is preceded in death by his sister, Harriett Jensen, a grandson, Jeremy Dean Schwenka and great granddaughter, Mary Gabriel Brass.

The family of Harry Richard "Dick" Schwenka created this Life Tributes page to make it easy to share your memories.

Send flowers to the Schwenka family.