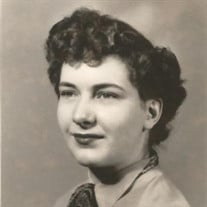 Helen Mae (Beezley) Meyer, 87, of Minden, Nebraska passed away on July 2, 2020, at Kearney County Health Services in Minden, Nebraska. Graveside services will be scheduled at a later date at Park Hill Cemetery in Syracuse, Nebraska. There will be no visitation as the family has honored Helen’s wish for cremation. Memorials in Helen’s honor are kindly suggested to the family for later designation. Craig Funeral Home in Minden is in charge of the arrangements. She was born on December 28, 1932, in Syracuse, Nebraska, to Eva (Bassett) Beezley and Thomas C. Beezley, and was the youngest of six children. Helen grew up in the Syracuse area and attended Syracuse Public Schools. Helen was united in marriage to Clifton Earl “Bill” Wehrman, Jr. of Nelson, Nebraska, in 1952 while he was in the service. To this union were born four children, Jacqueline, Patricia, Deborah, and C.E. Wehrman, III. After he was discharged from the Air Force, they moved to the family farm west of Nelson. They were later divorced. She was a secretary at the Meat Animal Research Center near Clay Center in the early 1970’s, and was later employed by Nelson Public Schools as district bookkeeper and library supervisor. Helen was a member of the Entré Nous Club in Nelson, Nebraska, the Order of the Eastern Star, and the Daughters of the American Revolution. She attended the Nelson Presbyterian Church. Her interests included collecting antiques, golfing, and genealogy. In 1979, Helen was united in marriage to William “Bill” Meyer and moved to Kenesaw, Nebraska. He preceded her in death in 2001. While living in Kenesaw, she was employed at the Hastings Regional Center in admissions and later at Mary Lanning Hospital in Hastings, Nebraska, until her retirement. She was preceded in death by both parents; brothers, Carroll Beezley, Francis Beezley, Norman Beezley, and John Beezley; sister, Marianne Beezley Cooper; sons-in-law, Brian Whiteley, and John Melroy. Helen is survived by Jacqueline Davis of Kenesaw, Deborah (Tom) Larson of Minden, Patricia (Marc) Skinner of Edgar, C.E. “Bill” (Peg) Wehrman, III of Kenesaw; three grandchildren, Matthew (Victoria) Davis of Lincoln, Rose Wehrman, and Victoria Wehrman of Kenesaw; three great-grandchildren; and several nieces and nephews. Tributes and memories can be shared with the family at www.craigfunerals.com.

Helen Mae (Beezley) Meyer, 87, of Minden, Nebraska passed away on July 2, 2020, at Kearney County Health Services in Minden, Nebraska. Graveside services will be scheduled at a later date at Park Hill Cemetery in Syracuse, Nebraska. There... View Obituary & Service Information

The family of Helen M. (Beezley) Meyer created this Life Tributes page to make it easy to share your memories.