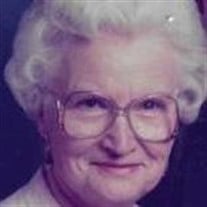 Illene M. Stratman, 99 years of age passed away on Monday, December 30, 2016 at the Bethany Home in Minden. Celebration of Life Services will be on Thursday, January 5, 2017 at 11:00 a.m. at the Westminster United Presbyterian Church in Minden with Rev. Dan Davis officiating. Burial will be prior to the celebration service in the Minden Cemetery. Visitation will be at the Layton-Craig Funeral Home in Minden on Wednesday from 3-5 p.m. Illene was born on September 30, 1917 on the family farm southwest of Minden to George and Eltena (Nelson) Wendell. She attended District 60 country school and then graduated from Minden High School in 1934 at 16 years of age. Illene graduated from M.E. Hospital in Omaha as a Registered Nurse in 1938. She worked in Omaha for a short time and worked at O.D. Johnson Hospital in Kearney. Illene married Rudolph “Rudy” Stratman on December 6, 1939. They lived and farmed on the Wendell farm southwest of Minden. They were blessed with two children, Karen and Max. Illene was a busy farm wife and mother. She was a 4-H leader, taught Sunday school, member of the Extension Club for 50 plus years, charter member of the Chordettes. Illene was also an active member of the Westminster United Presbyterian Church in Minden, singing in the church choir for over 60 years, taught Bible School and member of the church circles. Illene was a multi gallon blood donor, donating blood into her 90’s. Memorials are strongly suggested to the church, Salvation Army or the donor’s choice Survivors include one daughter, Karen Duncan and her husband, Vernon of Franklin; one son, Max Stratman of Minden; five grandchildren, Jim Duncan and his wife, Cindy, Beth Duncan, Crystal Hultquist and her husband, Marc, Lisa Terry and her husband, Brandon and Laura Robbins and her husband, Nathan; 13 great grandchildren, Taylor and Samuel Duncan, Megan, Kate, Abby and Seth Hultquist, Kenzie, Marcus and Cannon Terry and Skyler, Kylyn, Makenna and Tayden Robbins. She is preceded in death by her husband, Rudy.

Illene M. Stratman, 99 years of age passed away on Monday, December 30, 2016 at the Bethany Home in Minden. Celebration of Life Services will be on Thursday, January 5, 2017 at 11:00 a.m. at the Westminster United Presbyterian Church in Minden... View Obituary & Service Information

The family of Illene M. Stratman created this Life Tributes page to make it easy to share your memories.

Send flowers to the Stratman family.