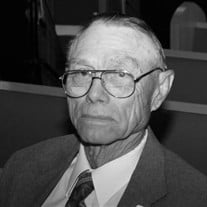 Irvin Rewerts, 91 years of age from Hildreth passed away on Friday, February 17, 2017 at his home near Hildreth. Funeral services will be on Wednesday, February 22, 2017 at 11:00 a.m. at the Trinity Lutheran Church in Hildreth. Burial will be at the St. Peter’s Lutheran Cemetery in Hildreth. Visitation will be at the Jelden-Craig Funeral Chapel in Hildreth on Tuesday from 4-6 p.m. Irvin was born on the family farm near Hildreth to John and Zinnia (Jurgens) Rewerts on March 14, 1925. He attended country school and worked on the farm. On August 5, 1956 he married Leona Davis at the Huntley United Methodist Church. They lived and farmed south of Hildreth. Leona passed away on January 21, 2007. Irvin was a member of the Trinity Lutheran Church in Hildreth. Memorials are suggested to the family. Irvin enjoyed working on the farm, riding in the combine and just spending time outdoors. After retirement, he enjoyed spending his mornings at the coffee shop, and all the visits and phone calls from family and friends filled his heart with joy. He also enjoyed to attend many school activities to support his grandkids and great grandkids. He was always thrilled when neighbors and friends would come to visit, especially when they brought homemade meals and pies to share. His special interest was farm tractors, mainly John Deere tractors. Survivors include two daughters, Beverly Dunmire and husband, Kenneth and Barb Rewerts all of Upland; six grandchildren, Kimberly Warford and husband Woody, Christy Dunmire, Kathleen Emanuel and husband, Dax, Kandy Dunmire, Eric Fields and Bradley Fields; four great grandchildren, Michala Dunmire, Laiken Emanuel, Paisley Emanuel and Brandon Warford. He is preceded in death by his wife, Leona, sister, Lenora Fruhling and two brothers, George Rewerts and his wife, and Vernon Rewerts.

Irvin Rewerts, 91 years of age from Hildreth passed away on Friday, February 17, 2017 at his home near Hildreth. Funeral services will be on Wednesday, February 22, 2017 at 11:00 a.m. at the Trinity Lutheran Church in Hildreth. Burial will... View Obituary & Service Information

The family of Irvin Rewerts created this Life Tributes page to make it easy to share your memories.

Irvin Rewerts, 91 years of age from Hildreth passed away on Friday,...

Send flowers to the Rewerts family.