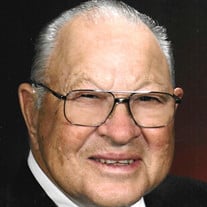 Jack F. Marlatt, 87 years of age from Minden, Nebraska passed away on Wednesday, December 21, 2016 at CHI Good Samaritan Hospital in Kearney. Funeral services will be on Tuesday, December 27, 2016 at 11:00 a.m. at the United Methodist Church in Minden with Reverend Paul Blanchard officiating. Visitation will be one hour prior to the funeral service at the church. Burial will be in the Minden Cemetery with burial rites provided by the Minden American Legion and the Heartwell VFW. Jack was born on September 13, 1929 in Kearney, Nebraska to Clifford and Queenie (Williams) Marlatt. He grew up in the Odessa-Kearney area and graduated from Odessa High School. He was a veteran of the Korean War serving in the U.S. Air Force. On July 2, 1954 he married Janet Waggoner in Tacoma, Washington. They farmed near Kearney, moving to Minden in 1970. Jack sold insurance and real estate and later owned and operated Marlatt Agency. Jack retired and sold his agency to Gary Thompson Agency. Jack was an active member of the community. He was past president of the Minden Lions Club, member of the American Legion Post 94 in Minden, past president of the Minden Chamber of Commerce and a member of the United Methodist Church in Minden. His passion was hunting, fishing and camping. He and Jan liked to travel and had made many trips with the Marlatt family. He enjoyed his coffee groups, Monday though Thursday at Daylight Donut and Friday at First Bank & Trust. Jack also enjoyed playing Pinochle with Jan and their friends while residing on the farm and lately playing Som ‘R’ Set at the Senior Center. Memorials are suggested to the American Heart Association or the United Methodist Church in Minden. Survivors include his wife, Janet “Jan” of Minden; two daughters, Linda Houborg and husband, Dave of Urbandale, Iowa and Karen Roenfeld and Doug of Malvern, Iowa; son Daniel Marlatt and wife, Torri of Overland Park, KS; nine grandchildren, Meghan Kingery and husband, Colt, Zachary Houborg, Katie Houborg, Jeremiah Roenfeld, Alexandra Wright and husband, Ryan, Nicholas Roenfeld, Gabriella Roenfeld, Joshua Marlatt and Jacob Marlatt; great grandson, Ryker Jack Kingery; four brothers, Douglas Marlatt and wife, Kristen of Cottage Groove, Minnesota, Kenneth Marlatt of Chadron, Jerry Marlatt and wife, Edith of Kearney, and Raymond Marlatt and wife, Betty of Raytown, Missouri; sister, Nancy Meester and husband, Willie of Holdrege and sister in-law, Pat Marlatt of Loveland, Colorado. He is preceded in death by his brother, William Marlatt, sister in-law, Beverly Marlatt and brother in-law, Wilbur Hecke.

Jack F. Marlatt, 87 years of age from Minden, Nebraska passed away on Wednesday, December 21, 2016 at CHI Good Samaritan Hospital in Kearney. Funeral services will be on Tuesday, December 27, 2016 at 11:00 a.m. at the United Methodist Church... View Obituary & Service Information

The family of Jack F. Marlatt created this Life Tributes page to make it easy to share your memories.

Send flowers to the Marlatt family.