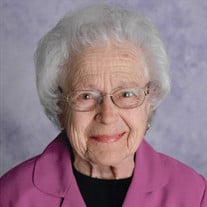 Jacqueline F. Schwartz, 97, of Minden, passed away on Sunday, April 11, 2021 at her home surrounded by family. Memorial services will be held at 11:00 a.m. on Saturday, April 24, 2021 at Bethany Lutheran Church in Minden with Rev. Donald Hunzeker and PMA Julie Schmidt officiating. The service will be live streamed to the funeral home’s Facebook page. Private family interment will be held prior to services at the Minden Cemetery. A memorial book signing with the family present will be held from 4:00 to 6:00 p.m. on Friday, April 23, 2021 at Craig Funeral Home in Minden. Memorials in Jacqueline’s honor are kindly suggested to Bethany Lutheran Church in Minden or the Kearney County Hospital Auxiliary. Craig Funeral Home is in charge of the arrangements. Jacqueline was born on October 17, 1923, to Frederick and Clara (Kummer) Cyphers. She grew up in Duncan, Nebraska where her father was a Doctor for forty plus years. She graduated from Kramer High School in Columbus after which she attended Midland College in Fremont, Nebraska where she met her husband-to-be, Jack Schwartz. After Jack was drafted out of college into the U.S. Air Force, she completed and received an Associate Degree in Business. She returned to the Columbus area where she worked. In March of 1944, she married Jack Schwartz. After he left for overseas duty, she worked for a time at Union Pacific Headquarters in Omaha and then some time later at the Platte County Court House in Columbus in the County Clerk’s office. Upon Jack’s return from overseas, he spent a year in the Air Force after which time they returned to Hildreth, Nebraska to be a part of his father’s John Deere Implement business and farming enterprises. In 1959, Jacqueline and Jack and family moved to a farm in Kearney County north of Hildreth where they lived and farmed for some 30 years. In March of 1996, they moved to Minden. Jacqueline served as organist at St. Peter’s Lutheran Church in Hildreth for 45 years. She participated in Women’s Missionary Society, Home Extension Club, was a 4-H leader and was a member of the American Legion Auxiliary, Midland Women, and the Nebraska 8th Air Force Historical Society. After moving to Minden, she became involved in several volunteer groups at Bethany Lutheran Church, the Kearney County Hospital Auxiliary, Elementary School Reading Mentoring Program, and Bethany Home. She truly enjoyed music of all kinds, reading, playing cards, gardening and following any and all of her grandchildren’s activities and having them spend time with her at her home. She was preceded in death by her parents, her husband, a sister, Margaret Reins, and a grandson, Anthony Blum. She is survived by daughter, Karen Nelson and husband, Roy of Minden, NE; son, Fred and wife, Nancy of Papillion, NE; daughter, Claire Fish and husband, Richard of Kearney, NE; daughter, Jane Blum and husband, Dale of Axtell, NE; and grandchildren, John Nelson and wife, Erin of Houston, TX; Kirsten Thom and husband, Nick of Minden, NE; Adrienne Dekarske and husband, Ben of Papillion, NE; Lucas Nelson of Boulder, CO; Trevor Schwartz of New York City, NY; Brandon Fish of Kearney, NE; Gavin Blum and wife, April of Minden, NE; Carson Blum and wife, Shelby of Hildreth, NE; great-grandchildren, Elizabeth and Graham Nelson of Tulsa, OK; Ethan, Harrison, and Katherine Jane Dekarske of Papillion, NE; Cameron Nelson of Houston, TX; Madelyn Blum of Hildreth, NE; Maverick and Lucky Thom of Minden, NE; and Teddy Blum of Minden, NE; as well as a host of extended relatives and close friends. Tributes and memories can be shared with the family at www.craigfunerals.com.

Jacqueline F. Schwartz, 97, of Minden, passed away on Sunday, April 11, 2021 at her home surrounded by family. Memorial services will be held at 11:00 a.m. on Saturday, April 24, 2021 at Bethany Lutheran Church in Minden with Rev. Donald... View Obituary & Service Information

The family of Jacqueline F. Schwartz created this Life Tributes page to make it easy to share your memories.

Jacqueline F. Schwartz, 97, of Minden, passed away on Sunday,...

Send flowers to the Schwartz family.