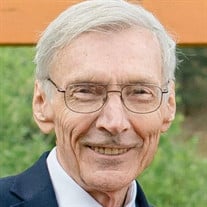 ***Postponement: Graveside services have been postponed until Wednesday, February 17, 2021 at 11:00 a.m. at Bethany Lutheran Cemetery south of Axtell. James (“Jim”) W. Albertson, III, 87, of Colorado Springs, CO, went home to be with the Lord on Friday, January 29, 2021, after a battle with pancreatic cancer. He was born September 25, 1933, in Opelika, Alabama, the son of James W. Albertson, Jr. and Ellen Lonore (Moore) Albertson Hurst. He grew up in Mission, Texas, as well as Nebraska, Colorado, Wyoming, Arizona and then back to Texas, graduating from Sam Houston High School. Jim served in the U.S. Navy from 1952-1956 during the Korean War. He was aboard the aircraft carrier USS Essex (CVA-9) and completed USN Electronics School during his enlistment. Shortly before going into the Navy, his life was transformed while attending a Billy Graham Crusade where he gave his life to Jesus Christ. While in the Navy, Jim discovered The Navigators ministry and after being discharged, spent nine years training and working at Glen Eyrie, the headquarters of The Navigators. He had a lifelong devotion to their ministry and the historic castle there. Jim married Leola (“Lee”) Nelson, whom he met at Glen Eyrie, on October 8, 1965, in Eagle Rock, CA. Jim received a bachelor’s degree from Colorado State University and a master’s degree from the University of Southern Colorado. He taught Industrial Arts and Math for 3 years at Air Academy Junior High and 26 years of Industrial Arts at Horace Mann Middle School in Colorado Springs, retiring in 1998. He freely shared his wealth of knowledge and skill in the trades with those in need. He enjoyed camping, hiking, four-wheel driving, and exploring old mines and ghost towns in the Colorado mountains. In retirement he spent time researching genealogy, gardening, and volunteering at Glen Eyrie and at his church. Jim was a member of Faith Evangelical Free Church, where he faithfully served as one of the facility managers and in many other capacities. Jim was devoted to Christ and to his family, and he will be greatly missed. Jim is survived by his beloved wife of 55 years; two daughters, Heidi (Chad) Hertz of Cedar Falls, IA, and Kristi (James) Stark of Littleton, CO; a son, David (Nicole) Albertson of Walkersville, MD; six grandchildren, Benjamin, Anna, Grace and Ella Hertz, Abigail and Andrew Albertson; two brothers, Donald (Linda) Hurst and Jerry Albertson; several nieces and a nephew. He was preceded in death by his parents and a sister, Barbara (Larry) Sell. A memorial service is planned for Sunday, February 7, at 2:00pm at Faith Evangelical Free Church, 6065 Oakwood Blvd, Colorado Springs. Masks will be required. The service will also be live streamed on the church’s YouTube channel (search: Faith EFC ColoSpgs). Graveside services will be held at 11:00 a.m. on Wednesday, February 17, 2021 at Bethany Lutheran Cemetery, south of Axtell, with the Rev. Marcia Dorn officiating. The graveside service will be streamed to the Craig Funeral Home Facebook page. Memorial donations may be directed to The Navigators (navigators.org) or Faith Evangelical Free Church (faith-efc.org). Craig Funeral Home in Minden is assisting the family. Tributes and memories can be shared with the family at www.craigfunerals.com.

The family of James W. Albertson, III created this Life Tributes page to make it easy to share your memories.

***Postponement: Graveside services have been postponed until...