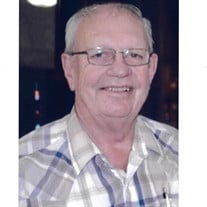 James “Jim” V. Jurgensmier, 78, of Heartwell, passed away on Sunday, November 3, 2019 at his home. Funeral Mass will be held at 10:30 a.m. on Saturday, November 9, 2019 at the Holy Family Catholic Church in Heartwell with the Rev. Julius Tvrdy officiating. Interment will be held following services at the Holy Family Catholic Cemetery near Heartwell. Visitation will be held from 5:00 to 7:00 p.m. on Thursday, November 7, 2019 at the Craig Funeral Home in Minden. Memorials in Jim’s honor are kindly suggested to the family for later designation. Craig Funeral Home is in charge of the arrangements. James Vernon Jurgensmier was born on January 14, 1941 in Hastings, Nebraska to Charles B. and Helen K. (Weber) Jurgensmier. He grew up in the Heartwell area and attended school in Heartwell and later graduated from Minden High School. On August 27, 1966, he was united in marriage to Loretta A. Brown in Heartwell and to this union, four children were born, Cheri, Alan, Cathy, and Stacey. The family made their home in Heartwell. Jim was a member of the Knights of Columbus, Heartwell Lion’s Club, Fraternal Order of the Eagles, Heartwell Village Board, and the Kearney Area Concerned Citizens. Jim started cooking meat in a smoker he built in the early 90’s. He became well known in the area for the amazing meat he cooked. Jim kept very busy catering numerous weddings, graduations and family events. His turkey was loved the most. He took pride in cooking the turkey for the Thanksgiving dinners served by the Kearney Area Concerned Citizens. He also provided the concessions for the Gibbon Tractor Pull for the last 10 years. Jim was very active in the village of Heartwell, where he could often be found mowing or fixing something for the village. Jim farmed until the mid 80’s. He then started work at Cargill in Heartwell. During his time at Cargill, he worked in Heartwell, Gibbon, and Kearney. He later went to work for B-4 Grain when they took over for Cargill in Kearney. Jim retired from B-4 Grain twice. He then began working seasonally for Aurora Cooperative…he simply didn’t know how to quit working. Those left to cherish his memory include his wife, Loretta Jurgensmier of Heartwell; son, Alan (Carol) Jurgensmier of Grand Island; daughters, Cheri Theesen of Grand Island, Cathy (Jon) Dunham of Marshalltown, IA, and Stacey (Frank) Hromadka of Kearney; grandchildren, Andrew (Miranda), Sara, David, Jeanel (Clint), Bryce, Matthew, Jaden, Kiara, Tyler, Marissa, Cody, Wyatt; great-grandchildren, Cecilia, and Josie; brother, Don (Kate) Jurgensmier of Miami, FL; as well as a host of extended relatives and friends. He was preceded in death by his parents, one brother, Ed Jurgensmier, and sister-in-law, Marge Jurgensmier. Tributes of memory can be shared with the family at www.craigfunerals.com.

The family of James "Jim" V. Jurgensmier created this Life Tributes page to make it easy to share your memories.

Send flowers to the Jurgensmier family.