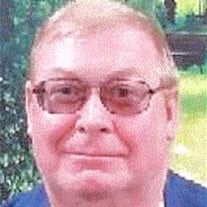 James P. Loschen, 61, of Holdrege passed away on Tuesday, October 2, 2018 at his home in Holdrege. Funeral services will be held at 10:00 a.m. on Monday, October 8, 2018 at Trinity Lutheran Church in Hildreth with the Revs. Patti and Steve Byrne officiating. Interment will be held following services at the Hildreth Cemetery. Visitation will be held from 2:00 to 4:00 p.m. on Sunday, October 7, 2018 at the Craig Funeral Home – Jelden Chapel in Hildreth. Memorials in Jim’s honor are kindly suggested to the family for later designation. Craig Funeral Home is in charge of the arrangements. Jim was born on July 30, 1957 in Minden to Wert J. and Pauline E. (Post) Loschen. He was baptized as an infant at Emmanuel Lutheran Church and Confirmed at St Paul Lutheran Church in Hildreth. Jim had the privilege of going to the Holy Land and Egypt with his mother and Aunt Margaret. He grew up in the Hildreth area and graduated from Hildreth High School. On July 2, 1997 he was united in marriage to Barbara K. Cushman in Las Vegas, NV. The couple made their home in Holdrege where Jim was employed by Landmark Implement, Inc. Jim loved hunting, fishing and camping at Harlan County Lake and in the mountains. He was a strong supporter of Barb’s involvement in numerous cycling events. Jim was a Sunday school teacher for several years at St. Paul's Lutheran Church in Hildreth. He enjoyed spending time with his family and friends as well as taking care of his beloved pets. Jim was a wonderful husband, brother, uncle, and friend to everyone who knew him. He will be greatly missed. Those left to cherish Jim’s memory include his wife, Barbara; brother, William J. Loschen and wife Cheryl; sister, Patricia Cook and husband Kevien; mother-in-law, Nelle Cushman; sister-in-law, Pat Jarmin and husband Randy; brother-in-law, Joe Cushman and wife Mary; as well as a host of nieces, nephews, other relatives and friends. Jim was preceded in death by his parents; brothers, John Loschen and Daniel Loschen; father-in-law, Cecil Cushman and sister-in-law, Vicki Cushman. Tributes of memory can be shared with the family at www.craigfunerals.com

James P. Loschen, 61, of Holdrege passed away on Tuesday, October 2, 2018 at his home in Holdrege. Funeral services will be held at 10:00 a.m. on Monday, October 8, 2018 at Trinity Lutheran Church in Hildreth with the Revs. Patti and Steve... View Obituary & Service Information

The family of James P. Loschen created this Life Tributes page to make it easy to share your memories.

James P. Loschen, 61, of Holdrege passed away on Tuesday, October...

Send flowers to the Loschen family.