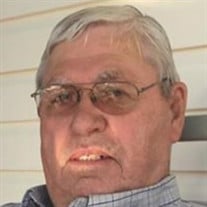 James, Jim Nolan, 75 years of age died Wednesday, August 23, 2017 at his home in Minden, Nebraska. Services will be Saturday, September 2, 2017 at 11 a.m. at the United Methodist Church in Minden with Reverend Paul Blanchard officiating. Burial will be prior to the memorial service in the Minden Cemetery. The family requests casual attire, especially purple colors for Minden and red colors for Nebraska. Craig Funeral Home in Minden is in charge of arrangements. Jim was born August 24, 1941 in Oklahoma City, OK to Pleas and Opal (Tomlin) Nolan. He lived in Oklahoma City to the age of 5 when his family moved to Indianola, NE. He graduated from Indianola High School in May 1959. He married Loneta Eaton on February 6, 1960. They had a son Charles (Randy) Nolan and a daughter, Loree Nolan Johnson. He attended McCook Jr. College for two years where he played football winning defensive player of the year; upon completing his schooling there he transferred to Idaho State University where he played football, graduating in 1964. He coached football and assisted in basketball and track for three years at Beaver Valley Schools in Lebanon, NE. He then coached football, some wrestling and track at Cambridge Schools in Cambridge, NE for 4 years. In the fall of 1971 he and his family moved to Minden, NE where he coached football and track until his retirement. He was an assistant coach for the Nebraska Shrine football game in 1973 and was head coach in 1975. His football team in Minden were State Champions in 1977. He won numerous Southwest Conference honors while coaching in Minden. In 1971 he received the Head coach of the Year for the Southwest Conference. He also taught government and driver’s education. He belonged to the NEA, MEA, Driver’s Ed. Assn., Minden Country Club and the United Methodist Church. Jim enjoyed camping, boating and fishing, golfing, traveling and sitting on the deck he built. He loved playing sports and enjoyed watching his children and grandchildren in all their activities. He loved teaching and especially coaching and considered all the students he had as his kids! Survivors include his wife, Loneta of Minden; son, Randy of Minden; daughter Loree Johnson and husband, Jeff of Minden; grandchildren, Jeremy and Jonathan Johnson, Melissa Nolan; great grandchildren, Tyler Nolan and Ryan Engel; sister Kathy Jorgensen and husband, Lane of Bloomington, IN; as well as nephews, nieces, cousins, and many friends. He is preceded in death by his parents and some great friends.

The family of James "Jim" Nolan created this Life Tributes page to make it easy to share your memories.

Send flowers to the Nolan family.