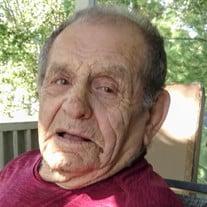 James Troy Philpot, Jr., 92, of Minden, lost his on-going battle with COPD on April 12, 2019 at Bethany Home in Minden. Funeral services will be held at 10:00 a.m. on Thursday, April 18, 2019 at the Craig Funeral Home in Minden with the Rev. Donald Hunzeker officiating. Interment with military honors will be held at 2:00 p.m. on Thursday, April 18, 2019 at the Fort McPherson National Cemetery near Maxwell, NE. Visitation will be held one hour prior to service times at the funeral home. Memorials in James’ honor are kindly suggested to the Kearney County Health Services Foundation or to Bethany Home in Minden. Craig Funeral Home is in charge of the arrangements. James was born in Gandy, NE on April 5, 1927 to Troy and Jesse (Reynolds) Philpot. He grew up and attended school in the Gandy area. Jim honorably served his country in the United States Army during the Korean War, from September 1948 through June 1952, earning a Good Conduct medal. Jim was a real cowboy for most of his life. He was happiest astride a horse, caring for the cattle on the ranch. He also worked as a farmhand and welder (a skill he learned in the Army). While not highly educated, he was filled with common sense, a committed work ethic and an engaging personality. Those left to cherish his memory include his sisters, Adah Ambler of Cozad, NE, Lola Dally of Baudette, MN, Rosella Albin of Parkton, MD, Kay Presley of Spanaway, WA; children, Polly Worley of Minden, NE and Earl Philpot of Petersburg, VA; grandchildren, Heather and Aaron Worley of Minden, NE, Megan Philpot of Richmond, VA and Kirstopf Bellamy of Denver, CO; as well as a host of nieces, nephews, other relatives and friends. He was preceded in death by his parents; brothers, Lyle and Ralph, and sisters, Mary, Esther, Ida, and Betty. Tributes of memory can be shared with the family at www.craigfunerals.com.

The family of James T. Philpot, Jr. created this Life Tributes page to make it easy to share your memories.

Send flowers to the Philpot, family.