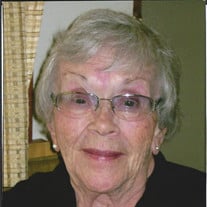 Jane E. (Partridge) Olson, 94 years of age from Minden, NE passed away on Sunday, July 3, 2016 at the CHI Good Samaritan in Kearney. Celebration of Life services will be on Friday, July 8, 2016 at 11:00 at the Westminster United Presbyterian Church in Minden with Rev. Dan Davis officiating. Visitation will be at the Layton-Craig Funeral Home in Minden on Thursday from 5-7 p.m. Burial will be prior to the celebration service at the Minden Cemetery. Jane was born on July 12, 1921 in Minden, NE to Vern and Emma (Jensen) Partridge. She grew up in the Minden area and graduated from Minden High School. On August 25, 1944 she married Vaughn M. Olson and they made their home in Minden. To this union was born three daughters, Cynthia Lee, Gretchen Jo and Patricia Ann. Jane was a member of the Westminster United Presbyterian Church and Presbyterian Women’s Circle in Minden. She served as the church organist for many years and was the accompanist for the Men’s Chorus; she played for many weddings, funerals and other special occasions over the years. Jane was a member and past president of the Minden Garden Club, member of the Women’s Auxiliary, Bridge Club and PEO in Minden. Jane was also the co-owner of Vaughn’s Men’s Shop in Minden for many years. Survivors include three daughters, Cindy Hollinger and husband, Ed of Kearney, Gretchen Ballou and husband, Barry of Hastings and Patricia Stauss and husband, Kenneth of Lincoln; six grandchildren and spouses, Brad Hollinger and wife, Janel, Brent Hollinger and wife, Shelly, Andi Jo Melton and husband, Charlie, Amy Loch and husband, Jeremy, Casey Ballou and wife, Lauren and Jeffery Stauss and wife, Joslynne; 10 great grandchildren and sister Patricia Zieg Horn of Long Beach California. She is preceded in death by her husband, Vaughn.

Jane E. (Partridge) Olson, 94 years of age from Minden, NE passed away on Sunday, July 3, 2016 at the CHI Good Samaritan in Kearney. Celebration of Life services will be on Friday, July 8, 2016 at 11:00 at the Westminster United Presbyterian... View Obituary & Service Information

The family of Jane E. Olson created this Life Tributes page to make it easy to share your memories.