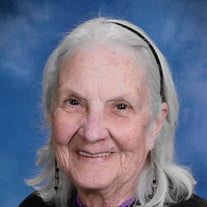 Janet “Jackie” Thompson, 85 years of age from Axtell, NE passed away on Saturday, May 20, 2017 at her home in Axtell. Memorial services will be on Friday, May 26, 2017 at 10:30 at the St. John’s Catholic Church in Minden with Father James Benton officiating. There will be no visitation. Craig Funeral Home in Minden is in charge of arrangements. Jackie was born on March 23, 1932 in Fall River, MA to David Louis and Marie Antoinnette (Genereux) Roy. She was baptized on April 18, 1944 at the St. Francis DeSales Catholic Church in Roxbury, MA. Jackie married Everett D. Thompson on November 10, 1956. They moved to Holdrege in 1966 and later moved to Axtell. Jackie was a member of the St. John’s Catholic Church in Minden. She enjoyed yardwork and spending time with friends and family. She loved to sew and crochet and over the years Jackie had made hundreds of items that she gave to family and friends. Survivors include her children; son, Mike Thompson and wife, Barb of Kearney, son Gerald “Jerry” Thompson and wife, Vickie of Omaha, daughter, Suzan Moon and husband, (David) of Omaha and son Sid Thompson and wife, (Joyce) of Garnett, Kansas; 10 grandchildren and 14 greatgrandchildren. She is preceded in death by her husband, Everett, son, William Lewis Thompson and brothers and sisters.

The family of Janet "Jackie" Thompson created this Life Tributes page to make it easy to share your memories.

Send flowers to the Thompson family.