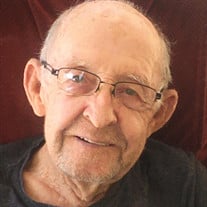 Jerry L. Johnson, 84, of Minden, passed away peacefully at his home on Monday, July 12, 2021 with his family surrounding around him. Celebration of life services will be held at 11:00 a.m. on Thursday, July 15, 2021 at Bethany Lutheran Church in Minden with the Rev. Donald Hunzeker and PMA Julie Schmidt officiating. The service will be streamed to the funeral home’s Facebook page. Interment will be held following services at the Minden Cemetery with military honors presented by the Minden American Legion and Heartwell Veterans of Foreign Wars in conjunction with the United States Navy Funeral Honors Team. A luncheon will be held after at the church. Visitation will be held from 2:00 to 4:00 p.m. on Wednesday, July 14, 2021 at the Craig Funeral Home in Minden. Jerry's wish for cremation will be honored following the visitation. Memorials in Jerry’s honor are kindly suggested to the Minden Senior Center. Craig Funeral Home is in charge of the arrangements. Jerry was born on May 28, 1937, near Macon, NE, to John and Selma (Ebke) Johnson. He was baptized and confirmed in Christ at Emmanuel Lutheran Church near Hildreth. He graduated from Hildreth High School in 1955. He enlisted in the United States Navy in 1956 and proudly served our country until 1958 when he was honorably discharged. On November 18, 1962, Jerry was united in marriage to Sandra Popple in Axtell. The couple made their home in Minden and lived in the same home for their 58 years of marriage. Jerry worked as a body man for many years at Weedlun’s in Minden before opening up J & J Bodyshop near Upland in 1979. He retired in 2002. Jerry was a volunteer Firefighter/EMT for many years for the Minden Volunteer Fire Department. Jerry enjoyed fishing, hunting and golfing. He especially enjoyed golfing on league in Franklin for many years. Jerry was a member of Bethany Lutheran Church in Minden. Survivors include his wife, Sandy of Minden; daughters, Jill Hinrichs of Hastings, Jodi (Randy) Sadd of Doniphan and son, Jeff (Loree) Johnson of Minden; grandchildren, Molly (Brian) Maronde, Morgan (Jake) Bachman, Jeremy Johnson, Mitch Hinrichs, Jonathan Johnson, Myles Sadd and Ridley Sadd; great grandchildren, Emma and Brody Maronde and Camden Bachman; sisters, June Loschen of Alma, Janette (Jeff) Bier of Redstone, CO, Joyce (Darrel) Albers of Kearney; brother, Jack (Cheryl) Johnson of rural Upland; brothers and sister-in-laws, Peg Soneson of St. Paul, Lois Popple of Kearney, Sue (Don) Roads of Kearney, Vicki Erickson of Austin, TX, Frank (Margo) Popple of Gothenburg, Johanna Popple of Alma, Maureen Popple of Holdrege, Ed Popple of Orleans, and many nieces, nephews, great-nieces and nephews as well as friends. He was preceded in death by his parents, John and Selma Johnson; parent-in-laws; William (Bill) and Etta Popple, brother and sister-in-law, Herb and Colleen Warnken, brother-in-laws, Mike Popple, Brad Popple, Bud Soneson, Max Popple, Brian Popple, Brent Popple and Gordon Loschen; and sister-in-law, Doreen Johnson. Tributes and memories can be shared with the family at www.craigfunerals.com.

Jerry L. Johnson, 84, of Minden, passed away peacefully at his home on Monday, July 12, 2021 with his family surrounding around him. Celebration of life services will be held at 11:00 a.m. on Thursday, July 15, 2021 at Bethany Lutheran... View Obituary & Service Information

The family of Jerry L. Johnson created this Life Tributes page to make it easy to share your memories.

Jerry L. Johnson, 84, of Minden, passed away peacefully at his...