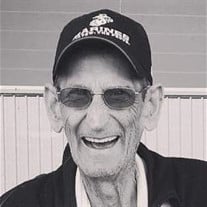 Jimmie Arlo Kenton, 72, of Minden passed away on January 4, 2019 at his home. Memorial services will be held at 2:00 p.m. on Friday, January 11, 2019 at the Bethany Home Chapel in Minden with the Rev. Donald Hunzeker officiating. Inurnment with military honors will be held prior to services at 11:00 a.m. at Riverside Cemetery in Gibbon. There will be no visitation as the family has honored Jim’s wishes to be cremated. Craig Funeral Home is in charge of arrangements. Jim was born on August 15, 1946 in Kearney to Burton and Wyvette (Lockwood) Kenton. He grew up in Kearney and received his education at Kearney High School graduating with the class of 1964. Jim entered the United States Marine Corps and faithfully served his country during the Vietnam War. He was honorably discharged on December 26, 1971. Jim was united in marriage Carol “Kelly” Tietjens on April 13, 1996 in Minden. He was employed by Olson Brothers, Kimple Oil, and Schwenka Trucking. Jim was a member of the V.F.W. and American Legion. He enjoyed spending time with his family and loved watching John Wayne and old western movies. Jim also loved playing horse- shoes and 4-point pitch. Those left to cherish his memory include step-daughters, Patricia Schippert and husband Mark of Minden, Jackie Eickmeier and husband Richard of Kearney, Lenora Kneeland and husband Bryce of Minden; step-son, Roger Bell Jr. and wife Heather of Kearney; 11 grandchildren; 8 great-grandchildren; brother, Jerry Kenton of Palm Desert, CA; sister, Lorraine Reed of Moberly, MO; sister-in-law, Marilyn Kenton of Minden; and several nieces and nephews. He was preceded in death by his parents; wife, Kelly; brother, Don Kenton; sisters, Lelia Guest, Betty Geiger, and Vera Davis. Tributes of memory can be shared with the family at www.craigfunerals.com.

Jimmie Arlo Kenton, 72, of Minden passed away on January 4, 2019 at his home. Memorial services will be held at 2:00 p.m. on Friday, January 11, 2019 at the Bethany Home Chapel in Minden with the Rev. Donald Hunzeker officiating. Inurnment... View Obituary & Service Information

The family of Jimmie "Jim" A Kenton created this Life Tributes page to make it easy to share your memories.

Send flowers to the Kenton family.