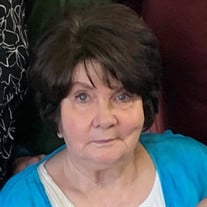 Joan (Murr) Catlin Dietz, 79, of rural Kearney passed away on Wednesday, August 25, 2021 at her home. Funeral services will be held at a later date. Memorials in Joan’s honor are kindly suggested to the family for later designation. Craig Funeral Home in Minden is assisting the family. Joan B. Murr was born on June 16, 1942 in Omaha, Nebraska to Charles and Jessie (Hunt) Murr. She grew up in the Lowell / Gibbon area and attended Gibbon Public Schools. She graduated from Gibbon High School. She was united in marriage to Robert “Bob” Catlin in 1961 in Gibbon and to this union, two children were born: Cynthia Jo and Robert Scott. The family made their home in Gibbon where she was employed by Medicine Mart, Morris Press, Wal-Mart and Cabela’s. Bob later passed away. Joan was united in marriage to Allan Dietz in 1989 in Axtell. The couple made their home in Gibbon before moving to Newark (rural Kearney). Joan enjoyed her family and friends. She loved her grandchildren and cuddling with her dogs. She enjoyed traveling, dancing, and gardening and was a great cook and loved to entertain, especially during the holidays. She was a treasured friend to many. Those left to cherish her memory include her husband, Allan Dietz of Newark (rural Kearney); step-sons, Gene (Penny) Dietz of Kearney and Clint (Heather) Dietz of Chandler, OK; step-daughters, Diana (Danny) Sullivan of Huntington Beach, CA, Debby (Mike) Martin of Omaha, Denise (Bob) McMeen of Lincoln; son-in-law, Cameron Adams of Gibbon; daughter-in-law, Merna Hatcher of Hebron; grandchildren, Ashley Frear Cooper and Joel Gerhardt of Kansas City, Nichole Hawley of Lincoln, Jessica and James Aunkst of Lincoln, Jacob Cooper, Allie Adams, and Cassidy Cooper, all of Kearney, and Hannah Adams of Gibbon; 15 step-grandchildren; 7 great-grandchildren; brother, Jack Murr of Gibbon; sisters-in-law, Linda Dietz of Coconut Creek, FL, Sharon Johnson of McKinney, TX; as well as a host of nieces, nephews, other relatives and friends. She was preceded in death by her parents; first husband, Bob; children, Scott Catlin and Cindy Cooper; and brother, Jerry Murr. Tributes and memories can be shared with the family at www.craigfunerals.com.

Joan (Murr) Catlin Dietz, 79, of rural Kearney passed away on Wednesday, August 25, 2021 at her home. Funeral services will be held at a later date. Memorials in Joan&#8217;s honor are kindly suggested to the family for later designation. Craig... View Obituary & Service Information

The family of Joan B. Dietz created this Life Tributes page to make it easy to share your memories.

Joan (Murr) Catlin Dietz, 79, of rural Kearney passed away on...

Send flowers to the Dietz family.