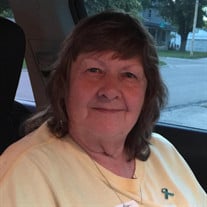 Joan K. Gregor, 72, of Upland, passed away on Saturday, December 5, 2020 at Bryan Medical Center in Lincoln. Private family services will be held at the Minden Evangelical Free Church with the Rev. Tom Barnes officiating. Interment will be held following services at the Upland Cemetery. Private family visitation will be held prior to services. A recording of the service will be streamed to the Minden Evangelical Free Church’s YouTube Channel. Memorials in Joan’s honor are kindly suggested to the family for later designation. Craig Funeral Home in Minden is in charge of the arrangements. Joan Kay Gregor was born on May 23, 1948 in Burke, SD to Art and Alma (Lindwurm) Kahler. She attended school in Winner, SD and attended Winner High School. She was united in marriage to Harold Bloker and to this union, two children were born: Laurie and Heath. She later moved to Lincoln where she married Terry Gregor on June 28, 1975, and to this union, one daughter, Dawn was born. In 1982, the family moved to Gibbon. Joan later moved to Burke, SD to help take care of her mother. In 2018, she relocated to Upland where she resided until her death. Joan was proud to be a stay-at-home mom for most of her children’s school age years. She then worked several years for the Nebraska Turkey Growers in Gibbon and later worked at Morris Press in Kearney, until her retirement. Joan loved her children, grandchildren, and great-grandchildren with all of her heart. She loved family history and spent many hours researching family ancestry and putting together scrapbooks for family members. She also enjoyed her trips to Wal-Mart and Hobby Lobby. Joan is survived by her children, Heath (Lori) Gregor of Gainesville, FL, Dawn (Travis) Kovarik of Kearney; son-in-law, Rod Svoboda of Upland; grandchildren, Shelly (Blake) Frost of Gothenburg, Sarah (Tyler) Barone of Littleton, CO, Alyssa (Cale) Spellman of Kearney, Destiny, Lane, and Sadie Kovarik of Kearney; great-grandchildren, Melody and Asher Barone, and Otto Frost; sisters, Dianne Olson of Minden, and Lois (Larkin) Birdow of Lincoln; as well as a host of extended relatives and friends. Joan was preceded in death by her parents and one daughter, Laurie Svoboda. Tributes and memories can be shared with the family at www.craigfunerals.com.

Joan K. Gregor, 72, of Upland, passed away on Saturday, December 5, 2020 at Bryan Medical Center in Lincoln. Private family services will be held at the Minden Evangelical Free Church with the Rev. Tom Barnes officiating. Interment will... View Obituary & Service Information

The family of Joan K. Gregor created this Life Tributes page to make it easy to share your memories.

Joan K. Gregor, 72, of Upland, passed away on Saturday, December...

Send flowers to the Gregor family.