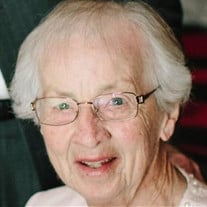 Minden resident Joan E. (Raun) Kopf, 86, died Saturday, December 30, 2017, at The Monarch Care Center in Lincoln. Funeral services are 11 a.m. Friday, January 5, 2018, at Bethany Lutheran Church in Minden with the Rev. Donald Hunzeker officiating. Interment will precede the services at 9 a.m. in the Osco Cemetery southwest of Norman. Visitation is 4-6 p.m. Thursday at the Craig Funeral Home in Minden. Memorials are suggested to The Monarch Care Center, Bethany Lutheran Church or Osco Cemetery Association or to the Kearney County Community Foundation for the Joan E. Kopf Memorial Scholarship Fund. Joan Elizabeth Raun was born Jan. 18, 1931, to Chris L. and Sarah S. (Smith) Raun on the family farm in Grant Township, Kearney County. She began her formal education at the Osco School (Kearney County School District No. 6). Her family moved into Minden in 1944, and she graduated from Minden High School in 1948. Joan attended the University of Nebraska in Lincoln, where she studied to become a home economics teacher and graduated in 1952. She was affiliated with the Chi Omega sorority and was selected for membership in the Mortar Board honorary society. In addition, she was chosen as a Countess of Ak-Sar-Ben in 1952. During her sophomore year at the university, Joan began dating Del Kopf from Lexington, a pitcher on the Nebraska baseball team whom she had first met in high school while both were showing steers at the Nebraska State Fair. They were married Aug. 16, 1952, at Westminster United Presbyterian Church in Minden. Their honeymoon was their trip from Nebraska to their first married home in Spokane, Washington, where Del was stationed in the U.S. Air Force. Later, they moved to Cozad where Del was part of his family’s farming operation for several years. They moved to Kearney County in 1958, at first making their home in the farmhouse where Joan was born. They farmed and fed cattle. Del passed away Feb. 27, 1991. Joan remained in the farming business for many more years until retiring and moving into Minden in 2005. She continued to own a cow-calf herd until recently. Through the years, Joan taught home economics at schools in Spokane, Cozad, Hildreth, Campbell and Minden. In Campbell, she also taught biology. She taught in Minden from 1976 until her retirement in 1996, then continued to substitute teach until she was 80 years old. Joan loved teaching. Her foods and nutrition and sewing classes were popular with students, and she is fondly remembered as a mentor by many. She was sponsor of the Minden High School Future Homemakers of America chapter for many years. She also loved working outdoors, growing large vegetable and flower gardens, and had a soft spot in her heart for animals — especially dogs, cats, and her cows and calves. She was an avid Nebraska baseball fan and traveled many miles to support her children, grandchildren and students in their sports and other activities, as well as her daughters and sons-in-law in their coaching endeavors as adults. Traveling, playing bridge and spending time with her kids, grandkids and great-grandchildren were among her joys. Joan was a faithful member of Bethany Lutheran Church, where her commitments included teaching Sunday school. She also was active in the Snowflake Club, P.E.O., and the Delta Kappa Gamma professional teaching sorority. She was a dedicated volunteer for the Kearney County Hospital Auxiliary and hospital fundraising efforts. She also served on the boards of the Osco Cemetery Association and Minden Opera House, and in past years was a 4-H leader and a judge for family and consumer science projects at many county fairs. Joan was a humble, hospitable person who worked hard to make life better for others. She and Del shared a great love and the “pioneer spirit” of adventure. Through her illness late in life, she was a fighter to the end. She passed away peacefully with family at her side. She will be deeply missed. She was preceded in death by her parents, Chris and Sarah Raun; her parents-in-law, Norman and Magdalena Kopf; her husband, Del; one daughter, Ellen Miller; and one brother, Ned Raun. Survivors include three daughters, Peg Exstrom and husband Steve of Minden, Sarah Rice and husband Bill of Lincoln, and Mary Jo Kopf of Lincoln; son-in-law, Dave Miller of Medford, Oregon; nine grandchildren, Chris Exstrom and wife Lora of Kearney, Lindsay Exstrom and fiancé Dave Truxal of Bonaire, Georgia, Allie Sabata and husband Lee of Overland Park, Kansas, Matt Exstrom of Lincoln, Andy Rice of Oklahoma City, Kelli Rice of Lincoln, Katie Rice of Lincoln, Wes Miller of Seattle and Del Miller of Medford, Oregon; three great-grandchildren, Emma, James and Kate Exstrom, all of Kearney; two brothers, Robert Raun and wife Eileen of Minden and Arthur Raun and wife Ruth of Elbert, Colorado; and sister-in-law, Essie Raun of Tulsa, Oklahoma.

The family of Joan E Kopf created this Life Tributes page to make it easy to share your memories.

Send flowers to the Kopf family.