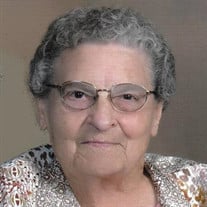 JoAnn Marie (Kile) Lammers, 88, of Minden, Nebraska passed from this life peacefully on Tuesday, January 29, 2019 at Kearney County Health Services. Funeral services will be held at 10:00 a.m. on Saturday, February 2, 2019 at the St. Paul Lutheran Church in Minden with the Rev. Christopher Hazzard and Rev. Donald Becker officiating. Private family interment will be held following services at the Minden Cemetery. Visitation will be from 4:00 to 6:00 p.m. on Friday, February 1, 2019 at Craig Funeral Home in Minden. Memorials in JoAnn’s honor are kindly suggested to Lutheran Hour Ministries, St. Paul Lutheran Church in Minden, or Bethany Home in Minden. Craig Funeral Home is in charge of the arrangements. JoAnn was born on October 9, 1930 in Upland, Nebraska to Floyd and Marie (Boutin) Kile. She grew up in Upland, Nebraska and graduated from Upland High School. She was united in marriage to Donald Lammers on January 16, 1949 in Upland, Nebraska. They recently celebrated their 70th wedding anniversary. They were blessed with two daughters, three granddaughters, and one great-grandson. She was baptized and confirmed in the Lutheran faith and was an active member of St. Paul Lutheran Church, Minden. She was formerly employed as a cook at Minden Public Schools. She was a member of the Ladies Aid/ Lutheran Women’s Missionary League at her church. She enjoyed flowers, ceramics, sewing/quilting, baking, cooking, word puzzles and jigsaw puzzles. Above all she loved being with her family. Left to cherish her memory is her husband, Donald of Minden; daughters, Connie (Robert) Griffin of Lincoln; Paula Burgess of Minden; granddaughters, Crystal Burgess (Tom Ervin) of Lincoln; Chantal Griffin of Lincoln; Rochelle Griffin (Andrew Millette) of Lincoln; great-grandson, Henry Millette of Lincoln; brothers, Wayne (Willene) Kile of Oxford; Darryl (Kay) Kile of Lincoln; sister-in-law, Joanne Lammers of Arapahoe; as well as many nieces, nephews and extended family. She was preceded in death by her parents; two brothers, Laverne Kile and Dean Kile; one sister, Erva Hubert; and son-in-law, Larry Burgess. Tributes of memory can be shared with the family at www.craigfunerals.com.

The family of JoAnn M. Lammers created this Life Tributes page to make it easy to share your memories.

Send flowers to the Lammers family.