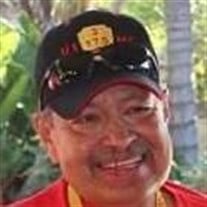 Minden, NE. Joe Martin Luz passed away peacefully January 12, 2017 in his home after a long and courageous battle with cancer. Joe was born in Milford, NE on December 8, 1949 to Mary Soto and Manuel Luz. Funeral Mass will be at St. John the Baptist Catholic Church, Minden, Nebraska at 10:00 a.m. on Wednesday, January 18th, 2017. Tuesday’s visitation is 6-7:30 pm at Layton-Craig Funeral Home in Minden with a Rosary at 7:30 p.m. Graveside services will be at the Fort McPherson National Cemetery in Maxwell, NE at 2:15 p.m. Joe was raised by his aunt and uncle (Candelario & Manuela Soto) of Gering, Nebraska, where he graduated from Gering High School in 1968. Joe was a Corporal in the United States Marine Corps (3rd 155/175 mm Gun Battery) where served in the Reactionary Squad in Vietnam. Upon his 1970 return to the United States he went to OCS School in California and was a Lieutenant in the Gering Army Reserve National Guard until 1976. Joe attended Nebraska Western College. From his first marriage, Joe was blessed with two daughters: Cynthia and Rebecca. He married the love of his life, Tina (Coleman) Luz in 2005 after a thirteen year courtship. He enjoyed a close relationship with Tina’s children: Tim, Lon and Katy. Together they share eleven beautiful grandchildren who were the light of his life. Joe worked at Lockwood Corporation for over twenty years, and then Kinder Morgan Gas Company for ten years, both in the Scottsbluff/Gering area. After retirement and moving to Minden, he worked in the maintenance division at Kearney County Health Services, until ill health. Never one to sit and stay idle for long, Joe then worked as a bailiff for the Kearney County Court until till just recently. Joe had a deep love for many things: His veteran friends (if you were a veteran, he was your friend), classic muscle cars, war memorabilia, traveling with his loving wife Tina and spending time with his children and grandchildren. Joe loved volunteering with Classic Cars of Kearney and devoted much of his time and energy to war veterans. He had a weekly coffee gathering at Kearney County Health Services where he engaged the male residents (most of them veterans) to gather and fellowship with one another. Joe is survived by his wife, Tina (Coleman) Luz, his daughters Cynthia (Reyes) Luz of Scottsbluff, NE and Rebecca Luz Fernau of Chadron, NE, stepchildren Tim (Veronica) Ingram and Lon (Jennifer) Ingram of Denver and Katy (Adam) Schmidt of San Antonio, TX; his grandchildren Jared, Osvaldo, Adelia and Joshua Fernau of Chadron, NE; Chacho Orlando Camargo-Luz of Scottsbluff, NE; Lyndon, Lonnie and Collin Ingram of Denver, CO; and Logan, Madison and Abby Schmidt of San Antonio, TX. He is preceded in death by his loving aunt and uncle Candelario & Manuela Soto, his mother Mary Soto, his brothers: John Olvera, Joseph and Jesse Cruz, sister Manuella Louisa Soto and granddaughter Delrisa Luz-Janis. Joe leaves behind his brothers Candelario Soto, Jr., Frank Cruz and sisters Rita Garcia, and Linda Cruz, and many other family members and cherished friends. Memorials are suggested to the family.

Minden, NE. Joe Martin Luz passed away peacefully January 12, 2017 in his home after a long and courageous battle with cancer. Joe was born in Milford, NE on December 8, 1949 to Mary Soto and Manuel Luz. Funeral Mass will be at St. John the... View Obituary & Service Information

The family of Joe Martin Luz created this Life Tributes page to make it easy to share your memories.

Send flowers to the Luz family.