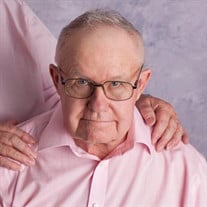 John “Bob” R. King, 80, of Minden, passed away on Saturday, October, 10, 2020 at Mt. Carmel in Kearney. Memorial services will be held at 2:00 p.m. on Thursday, October 15, 2020 at Bethany Lutheran Church in Minden with the Rev. Donald Hunzeker and PMA Julie Schmidt officiating. Current recommendations for faith based services will be followed and the use of a facemask is encouraged. The service will be live streamed to the Craig Funeral Home Facebook page. Military honors will be presented following services at the church by the Minden American Legion and Heartwell Veterans of Foreign Wars. Private family inurnment will take place later at the Norman Cemetery. There will be no visitation as the family has honored Bob’s wish to be cremated. Memorials in Bob’s honor are kindly suggested to the family for later designation. Craig Funeral Home is in charge of the arrangements. Bob was born on August 15, 1940 in rural Norman, NE to John B. and Elsie V. (Podewitz) King. He grew up in the Norman area where he attended school until the eighth grade. He then attended Minden High School. Bob entered the U.S. Army on October 23, 1963 and faithfully served his country until October 23, 1965. Most of his service time was spent at Fort Hood, Texas. Bob was united in marriage to Barbara J. Stone on January 23, 1966 in Norman and to this union, three sons were born: John, Scott, and Jobey. The family made their home in Norman, where Bob worked as the manager for the Norman grain elevator until retiring in 2005. Bob and Barb moved to Minden in 2005. He was a member of Bethany Lutheran Church in Minden and the Minden American Legion. Bob was a very dedicated worker; he loved sporting events and spending time with his family, especially his grandchildren. Bob truly was a kid at heart. His entire life revolved around his family. Those left to cherish his memory include his wife, Barb King of Minden; sons, John King of Minden, Scott King of Colby, KS, and Jobey (Leslie) King of Littleton, CO; granddaughters, Amanda (Justin) Clark, Laurie (Charles) Cosper, Heather King, Kristen King, Braeley King, Maryn King, Kayla King, and Nora King; great-grandchildren, Braden, Bryleigh, Aidrich, Quintin, Emma, and Charlotte; sisters, Mae (Bill) Smith of Elwood, Marilyn Dolloff of Kennsett, IA, Ann Walter (Del Wattjes) of Raymond, NE; as well as a host of nieces, nephews, other relatives and friends. He was preceded in death by his parents; brothers, Billy (Joyce) King, and Wesley King; and one sister, Lenora (Jim) Gentert. Tributes and memories can be shared with the family at www.craigfunerals.com.

The family of John "Bob" R. King created this Life Tributes page to make it easy to share your memories.

Send flowers to the King family.