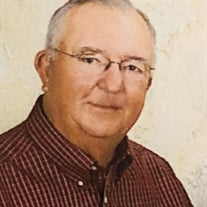 John J. Carlson, 84, of Minden, passed away on Friday, July 31, 2020 at Mt. Carmel – Keens Memorial Home in Kearney. Memorial services will be held at 2:00 p.m. on Friday, August 14, 2020 at the Westminster United Presbyterian Church in Minden with the Rev. Sharon Rees officiating. Inurnment will be held following services at the Minden Cemetery with military honors presented by the Minden American Legion and Heartwell Veterans of Foreign Wars. Current recommendations for faith based services will be followed and the use of a face mask is encouraged. There will be no visitation as the family has honored John’s wish to be cremated. Memorials in John’s honor are kindly suggested to the Westminster United Presbyterian Church in Minden. Craig Funeral Home is in charge of the arrangements. John Joseph Carlson was born on September 14, 1935 in Iola, Kansas to Paul W. and Vera D. (Bayer) Carlson. He grew up in Ruston, Louisiana and Little Rock, Arkansas until moving to the family farm near Minden his junior year. He then graduated from Minden High School with the class of 1953. John continued his education at the University of Nebraska at Lincoln where he was a member of the Delta Tau Delta fraternity. He then faithfully served his country with the United States Army in Germany as an Ordinance Specialist. He was united in marriage to Marllys L. Ecklund on June 11, 1961 in Bertrand, Nebraska and to this union, two children were born: Sue Ann and Richard. The family made their home near Minden where John found his true passion of farming. John was a member of the Westminster United Presbyterian Church in Minden, where he served on the board of trustees. He was a member of the Minden American Legion; he served on the Kearney County Soil Conservation Board, as well as the Nebraska Private Industry Council. His hobbies included fishing, watching Husker sports, and spending time with his family and close friends. Those left to cherish his memory include his wife, Marllys of Minden; daughter, Sue Ann and husband Paul Fromm of West Des Moines, IA; son, Richard Carlson, of Urbandale, IA; grandchildren, Jake and wife Emilie Fromm of Des Moines, IA, and Anna Fromm of Waukee, IA; as well as a host of extended relatives and friends. John was preceded in death by his parents; father and mother-in-law, Oscar and Verna (Coy) Ecklund, and brother and sister-in-law, Cloyd and Elsie Ecklund. Tributes and memories can be shared with the family at www.craigfunerals.com.

The family of John J. Carlson created this Life Tributes page to make it easy to share your memories.

Send flowers to the Carlson family.