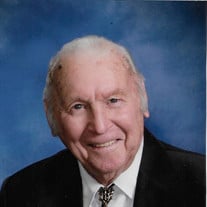 John N. Johnson, 89, of Upland died Friday, June 9, 2017 at Bethany Home in Minden. Funeral services are set for 11 am Tuesday, June 13 at the United Methodist Church in Minden, with burial at Upland Cemetery at 9 am prior to the service. Visitation will be from 3-5 pm on Monday at Craig Funeral Home in Minden. Memorials are suggested to Bethany Home or Bethany Home Memory Unit. John was born August 31, 1927 to Fred and Esther (Kirkeby) Johnson at Upland, Nebraska. He attended Hilltop Rural School and graduated from Upland in 1945. He began his lifetime career as a farmer prior to graduation. On May 23, 1946 he married Euella Detrick of Upland. They recently celebrated 71 years of marriage. They were blessed with 4 children: Linda, Doug, Rita and Todd. He will long be remembered for his quick wit and sense of humor. His orneriness will be greatly missed. As a grandson said “a day didn’t go by, that he didn’t put a smile on someone’s face”. He knew no stranger. John took great pride in his family and enjoyed his grandchildren and great-grandchildren very much. John was a member of the Upland United Methodist Church. He was a former member of the National Farmers Organization and Kearney Elks Club. He and Euella enjoyed many years of playing Bingo and made many friends there. He lived on the farm near Upland until December 2016 when he moved to Bethany Home in Minden. He passed away from complications of pneumonia and dementia. Survivors include his wife Euella of Upland, daughter Linda and husband Thadd of Sioux Falls, SD, daughter Rita and husband Steve Crooks of Minden, son Todd of Hastings, 6 grandchildren and 9 great-grandchildren, a brother Gary and wife Betty Jo, sisters-in-law Ruth Johnson and Shirley Meiner as well as many nieces, nephews and friends. He is preceded in death by his son, Doug and daughter-in-law Nancy, his parents, sister Norma and her husband Delmar Jacobsen, brother Floyd and his wife Naomi, brother Lee, sister-in-law Virginia and her husband Cliff Borchers, brother-in-law Allen Meiner, in-laws Roy and Alice Detrick and nephew Gayle Borchers.

John N. Johnson, 89, of Upland died Friday, June 9, 2017 at Bethany Home in Minden. Funeral services are set for 11 am Tuesday, June 13 at the United Methodist Church in Minden, with burial at Upland Cemetery at 9 am prior to the service. Visitation... View Obituary & Service Information

The family of John N. Johnson created this Life Tributes page to make it easy to share your memories.