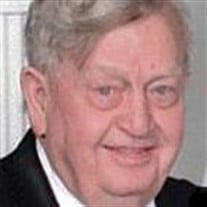 John A. Willman, 85, of Minden, formerly of Bertrand, passed away on Thursday, January 25, 2018 at Bethany Home in Minden. Memorial services will be held at the Minden Evangelical Free Church at 2:00 p.m. on Thursday, February 1, 2018 with the Rev. Tom Barnes officiating. Interment will be held at a later date in the Keene Cemetery. There will be no visitation as the family is honoring John’s wish to have his body donated to science for the advancement of medical research. Craig Funeral Home is in charge of the arrangements. John Allen Willman was born on December 2, 1932 at his family’s home in Wilcox to Ralph and Esther (Wendell) Willman. He grew up in the Wilcox and Axtell area and graduated from Axtell High School. He then attended Kearney State College where he earned his Bachelors and Masters of Science degrees. John faithfully served his country during the Korean Conflict with the United States Army. John was united in marriage to Evon Wittfoth in Axtell and to this union, three children were born: Monica, Brent and Amy. The family made their home in Axtell, York, Bertrand, Holdrege and Minden where John enjoyed teaching at many public schools. He also helped with the family farming operation. He was a member of the Axtell Presbyterian Church, York Methodist, Bertrand Lutheran and Holdrege Lutheran churches. John’s hobbies included woodworking, singing, and spending time with his family. Those left to cherish his memory include his wife, Evon, son, Brent Willman and wife Tess of Lincoln; daughters, Monica Daake and husband Rod of Fort Worth, TX and Amy Lyons and husband Kevin of Lincoln; 12 grandchildren and 10 great-grandchildren; sister, Ruth Smith of Mechanicsburg, PA, as well as a host of nieces, nephews, other relatives and friends. John was preceded in death by his parents, sisters, Etta Wiseman and Helen Hettle and one brother, Thayne Willman. Memorials are suggested to the family for later designation.

John A. Willman, 85, of Minden, formerly of Bertrand, passed away on Thursday, January 25, 2018 at Bethany Home in Minden. Memorial services will be held at the Minden Evangelical Free Church at 2:00 p.m. on Thursday, February 1, 2018 with... View Obituary & Service Information

The family of John A. Willman created this Life Tributes page to make it easy to share your memories.

Send flowers to the Willman family.