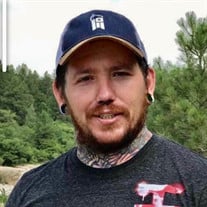 Joshua Willis Longsine, age 35, passed away peacefully at St. Anthony Hospital in Westminster, CO on Monday, June 15, 2020. A celebration of life open house will be held from 5:00 to 7:00 p.m. on Thursday, July 2, 2020 and will continue on Friday, July 3, 2020 from 10:00 a.m. to 12:00 p.m. at Craig Funeral Home in Minden, Nebraska. Graveside services will be held following the open house at 1:30 p.m. on Friday, July 3, 2020 at Pleasant Hill Cemetery in Axtell with the Rev. Christopher Hazzard officiating. Current directed health measures will be followed. The family has honored Josh’s wish for cremation. Craig Funeral Home is in charge of the arrangements. Josh was born on March 24, 1985 in Hastings, Nebraska to Dan and Linda Hunt. At the age of 7, he was adopted by his father, Craig Longsine of Minden. Josh attended Minden Public Schools and graduated with the class of 2003. After graduating, he moved to Kearney where he worked at Cash-Wa Distributing and Thunderhead Brewery. In 2015, he made the move to Colorado and found a job he adored at Kokopelli Beer Company. Some may know Josh as “J-Lo” or “Shortpost”. As a child Josh expressed himself though creative ways. Starting with vibrant hair colors, to piercings, and eventually found his true passion, tattoos. Josh enjoyed baseball and played the catcher position so he could “be in every play.” He was also very good at bowling, which he learned from his dad. He was known for his kind spirit, his non- judgmental listening ear, and ability to have fun no matter what. Josh enjoyed the company of his friends. You could call him day or night and he would be there without complaint. He was an avid animal lover and had very special pets, including Chopsticks, Xena, Keno and Murdoc. Josh truly lived life to the fullest with simple pleasures. He had an uncanny ability to make every person he met feel special and loved. As stated by Craig, “there were always 3-4 kids in the rumpus room trading cards” and Josh continued to live with 3 or 4 people his entire life. Josh is survived by his father, Craig Longsine of Minden; grandfather, Keith “Bud” Longsine of Holdrege; aunt, Janean and uncle, Warren Hahn of Shelton; aunt, Lori Behnken of Columbus; aunt, Gail and Uncle Larry Hayes of Holdrege; uncle, Russell Wright of Holdrege; as well as many other relatives and friends. He was welcomed into his heavenly home by his mother Linda Longsine; grandparents, Ike & Clara Wright, and grandmother, Marilyn Longsine. As of all of us are left to mourn his death, we remember the exceptional amount of good memories with Josh. He left behind a clear example of how to love and treat others. In lieu of flowers, if desired, friends may make memorial donations the http://www.gofundme.come/f/josh-longsine-memorial/donate or can send their condolences to Craig Longsine at 336 S. Colorado Ave, Minden, NE 68959. Tributes and memories can be shared with the family at www.craigfunerals.com.

Joshua Willis Longsine, age 35, passed away peacefully at St. Anthony Hospital in Westminster, CO on Monday, June 15, 2020. A celebration of life open house will be held from 5:00 to 7:00 p.m. on Thursday, July 2, 2020 and will continue... View Obituary & Service Information

The family of Joshua W. Longsine created this Life Tributes page to make it easy to share your memories.

Send flowers to the Longsine family.