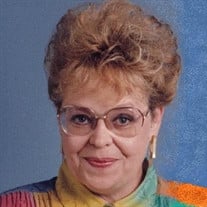 Judith E. Wederski-Glinsmann, 80, of rural Gibbon, passed away on Wednesday, July 31, 2019 at Mary Lanning Healthcare in Hastings. A Celebration of Life will be held at 6:00 p.m. on August 10, 2019 at her home. Memorials in Judith’s honor are kindly suggested to the American Arthritis Foundation or to the Kearney Area Animal Shelter. Craig Funeral Home is in charge of the arrangements. Judith was born on May 9, 1939 in Chicago, Illinois to Frederick J. and Eileen H. (Murphy) Hall. She grew up in Chicago and Frankfurt, Illinois where she received her education at Sacred Heart Catholic School. She was united in marriage to Bill Wederski in 1963 in Kansas. The couple was married for 23 years and later divorced. Judith moved to Nebraska in 1963 and she began working at Walgreens in 1967, where she faithfully served in various positions until her retirement in 2010. She had a true passion for her work. Judith’s hobbies included crocheting, tending to her flower gardens and lawn, watching birds, puzzle books and spending time with her beloved dogs. She also enjoyed watching animal shows and attending horse races. Those left to celebrate her life include her daughter, Addie Hansen and husband Tom of McCook, NE; three grandchildren; two great-grandchildren; brothers, Kenneth Goetz and wife Emily of Star City, AR, Martin Goetz of Dallas, TX, and Donald Goetz of Gibbon, NE; sister, Gayle Baird of Gibbon, NE; as well as a host of extended relatives and friends. She was preceded in death by her parents, and brother, Arthur Goetz. Tributes of memory can be shared with the family at www.craigfunerals.com.

The family of Judith E. Wederski-Glinsmann created this Life Tributes page to make it easy to share your memories.

Send flowers to the Wederski-Glinsmann family.