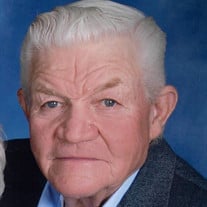 LaVern Fredrick Johnson, 82, of Campbell passed away on January 8, 2021 at his home. Funeral services will be held at 1:30 p.m. on Thursday, January 14, 2021 at the Westminster United Presbyterian Church in Campbell with the Reverend Mark Diehl officiating. Interment will be held at 4:00 p.m. at the Minden Cemetery. Visitation will be held on Wednesday, January 13 from 4:00 to 6:00 p.m. at the Craig Funeral Home in Minden. The current health recommendations will be followed and the use of a face mask is required. A recording of the service will be posted to the Craig Funeral Home Facebook page. In lieu of flowers, memorials are kindly suggested to the family for later designation. Craig Funeral Home in Minden is in charge of the arrangements. LaVern was born on October 15, 1938 in Campbell, Nebraska to Ervin and Velma Reiss Johnson. He was baptized and confirmed into faith at the Westminster United Presbyterian Church in Campbell, where he was an active lifetime member. He grew up in the Campbell area and began his education at the Presley rural school just down the road from his home. He graduated from Campbell High School with the class of 1956, and earned his vocational training with the “school of hard knocks.” After high school he was employed for several years by Reinking Grain Company in Campbell. He also shelled corn in the Osco area with Wilf Werner. LaVern was united in marriage to Linda Anderson on August 28, 1960 at the Presbyterian Church in Minden, Nebraska. This union was blessed with two children: Timothy and Kristin. The family first made their home north of Campbell. In 1966 they moved to the “home place,” where they continued to live and farm for his entire life. LaVern served for many years on both the Campbell and Silver Lake School Boards. He also served many terms in the positions of Elder, Trustee and Deacon at Westminster Presbyterian Church. Other than his family and his faith, LaVern’s greatest love was the land. Farming and raising cattle were his life. His work ethic was unmatched by few, and this was something that he proudly passed on to his children and grandchildren. Other than feeding his cows, he never worked on Sundays, choosing instead to honor his faith in God. He was an expert in the proper use of a corn knife, a grain scoop, a pitch fork, and a fence stretcher. He carefully taught these skills to his son, his grandchildren, and any employees he had over the years. LaVern never said “No,” but he did have a very convincing “look” which always seemed to get his point across. He had a Christmas Eve tradition of cleaning the barn, just in case Jesus would happen to stop by. The boys always knew that regardless of what other chores needed to be done, they would have to find some extra time to complete this special task. He also loved to mow the lawn, and spent countless hours making sure the whole farm was carefully groomed. In fact, his family lovingly called him Forest Grump. Going to morning coffee was another of LaVern’s favorite pastimes, and was something he seldom missed. He had his own special coffee mug … you might say it was king-sized. He could drink a whole pot of coffee by himself, if you let him. But, beyond the humorous anecdotes, LaVern will be remembered mostly for his love of family, his love of God, his service to others, and his good-natured personality. Simply stated, he was a good man. Those left to cherish his memory include his wife of 60 years, Linda; son, Timothy and wife Pamela of Upland; daughter, Kristin Johnson of Sparta, Tennessee; grandchildren, Brittany (Wade) Crawford and children: Audrey, William and Natalie of Sundance, Wyoming; Jake (Alex) Johnson and children: Sophie and Henry of Imperial, Nebraska; Lance Johnson of Campbell; Austin Johnson of Lincoln; Katie (fiancé Will) and daughter Chloe of Sparta, Tennessee; and Leslie (Josh) Hutchings and son Declan of Walling, Tennessee; sister, Annette Kuehn of Minden; and numerous nieces and nephews. He was preceded in death by his parents; 7 brothers-in-law; and 4 sisters-in-law. Tributes and memories can be shared with the family at www.craigfunerals.com.

LaVern Fredrick Johnson, 82, of Campbell passed away on January 8, 2021 at his home. Funeral services will be held at 1:30 p.m. on Thursday, January 14, 2021 at the Westminster United Presbyterian Church in Campbell with the Reverend Mark... View Obituary & Service Information

The family of LaVern F. Johnson created this Life Tributes page to make it easy to share your memories.

LaVern Fredrick Johnson, 82, of Campbell passed away on January...